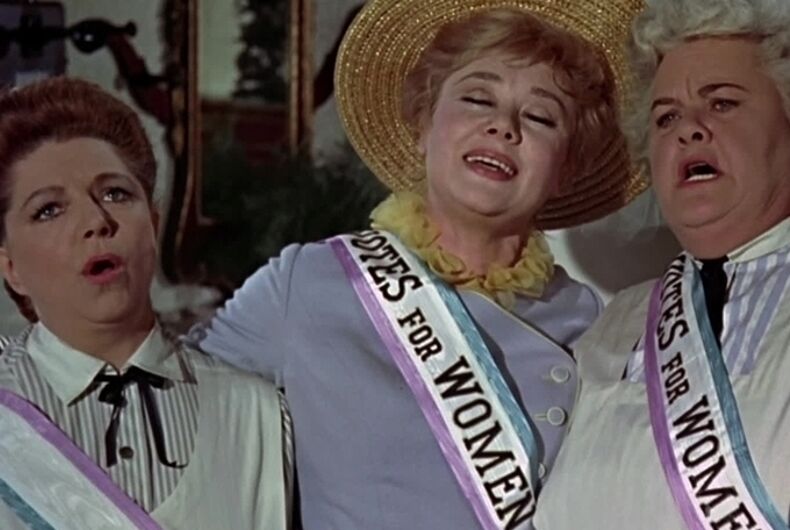 No more the meek and mild subservient we We're fighting for our rights militantly Never you fear So cast off the shackles of yesterday Shoulder to shoulder into the fray Our daughters' daughters will adore us And they'll sing in grateful chorus Well done, Well done, Well done, Sister SuffragettePhoto: Still from Disney's Mary Poppins

If we’ve learned anything from Donald Trump’s ascendency to the presidency on the back of a racist, sexist, and xenophobic campaign, it’s that Republicans – and particularly evangelical Christians – are willing to dump any vestige of morality overboard faster than a crate of tea in Boston Harbor.

CRTV commentator Gavin McInnes and Gateway Pundit’s White House reporter Lucian Wintrich proved that in spades when talking about this week’s election results. Democrats stomped Republicans in race after race as voters reacted to Trump’s unhinged tantrums and bigoted policies by electing a historic group of diverse officeholders. The two had a strange theory on why so many transgender candidates won election.

“The liberals say, ‘Maybe we should give up on identity politics,’ but you look at all the Sikhs and black people and trans who won in this election and all these unprecedented cases. It had nothing to do with policy. It was all identity politics,” McInnes said on his YouTube show “Get Off My Lawn.” (No, seriously. That’s what it’s called.)

He continued, “I was looking at those two trannies who won. There’s no substance there at all. And I think it’s because we let women vote. Women have been voting now based on their ‘feels’ for many years. They brought us Obama, no substance.”

Our friends at Right Wing Watch gives us the video of the exchange below. Watch, but be careful that your jaw doesn’t hit the floor too hard.

Rosie O’Donnell: I knew Whitney Houston was a lesbian & so did everyone else