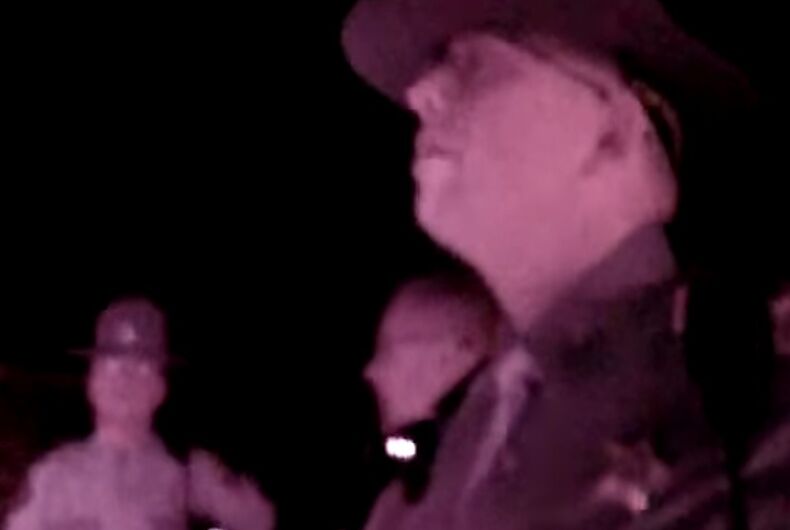 Two gay men in western Kentucky say they were the victims of police violence and are now facing trumped up charges.

Billy Hamilton said that police went to his home on February 22 looking for his husband Patric Rodriguez, who wasn’t home. The officers wouldn’t explain why they wanted to talk to Patric, so Billy called a non-emergency line at the Sheriff’s Department three times to find out what the problem was. He still didn’t get an answer.

The Sheriff’s Department didn’t appreciate the calls, so several officers went to the couple’s home near midnight that day.

Patric, who had had a few drinks, answered the door this time. “I thought ‘oh hey, they’re here for something in the neighborhood and can I help out?’ I came out with the intention to help them-assist them, with whatever they were there for,” Rodriguez said.

He went out to the porch to talk to several police officers, and he accidentally locked himself out in the process. That’s when a police officer got angry and called Patric a “shit apple redneck.”

“I will tell you right now you shit apple redneck, if you raise your voice to me one more time I will throw your ass right off this porch and drag you to jail, now you need to understand that,” he said.

Another officer said they were there to find Billy because he had been “giving me problems,” probably a reference to the phone calls earlier in the day.

The officers then saw Billy in an upstairs window filming everything on his phone. They went to their car to get a sledgehammer to break the door down and threatened to shoot the couple’s dog when it started barking.

Eventually Billy opened the door. Police, who didn’t have a warrant, entered the home, tased Billy, and then arrested him on charges of resisting arrest, disturbing the peace, and harassing communications.

Patric was also arrested for alcohol intoxication and disorderly conduct.

In Kentucky, both disturbing the peace and public intoxication charges have to be related to a public disturbance, and Patric says that both he and his husband were in their home before the police showed up.

They spent a night in jail and it wasn’t until the next day that they learned that the police were originally looking for Patric because of an outstanding fine in another county. They went there and settled that matter the same day.

The officers can be heard in the video calling the men “doo-dah.” Their attorney called it “The most extreme case of homophobic police brutality I’ve seen here.”

They are still working to have the charges dismissed.

Patric says that they thought it was safe to be out in Kentucky. They had recently moved in from southern California and said that “everyone in town” knows that they’re a couple.

But now they’re afraid. “Until this happened I felt extremely comfortable, now we’re very paranoid. When we’re in the living room we look at every car passing by, it’s just instinctive- ‘is that a cop? Is that a cop? Are they here again?’ It’s changed our comfort level quite a bit.”

The Graves County Sheriff’s Department has not commented on the story.

It only takes a few Facebook likes to out someone, a study finds

This teacher was fired for being gay