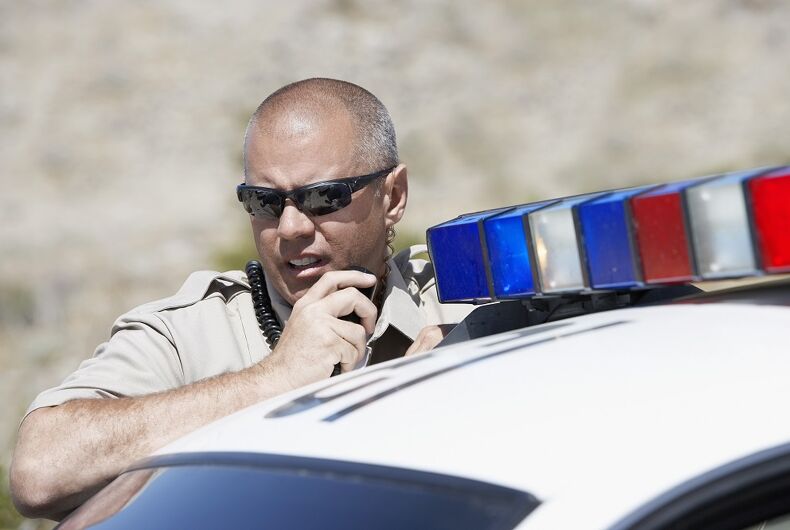 In 2009, a public gay sex sting operation in Palm Springs resulted in twenty-four arrests and fourteen prosecutions. Defense attorneys in the case presented evidence that their clients were targeted because they were gay, but the judge rejected their argument.

Now, a secret recording of the judge making a homophobic comment in an unrelated case might shine some light on why he ruled against the gay men.

The Warm Sands neighborhood in Palm Springs was a known cruising area with several gay resorts. In June, 2009, Palm Springs police performed a four-night undercover sex sting in the area and arrested twenty-four men, all gay.

Undercover “capture the fag” sting operations were more common ten years ago than they are today. Police usually had flimsy evidence in these cases and expected those arrested to confess, sign a deal, and hope the whole thing would go away without contacting an attorney.

At the end of the hearing, though, judge David Downing upheld the charges and allowed the prosecution to continue. “These… men were not arrested for being gay,” he said. “These men were arrested for having sex in public.”

In an unrelated murder case in 2012, Downing was secretly recorded making anti-gay and HIV-phobic comments.

During a break from jury selection, when the court microphones were turned off, one of the defendants left his laptop on and recording. Downing can be heard saying that he will not read motions filed by the one of the defendants, who was gay and HIV-positive, because they were in envelopes that were presumably licked shut.

“Lord knows where his tongue has been,” he said.

Of course, the First Amendment does not protect anyone from the consequences of their words, and presumably a judge knows that.

Downing, who retired in 2013, told the Desert Sun that he does not remember the comments.

The recording was made public this past week, and it threatens to undo the murder conviction. If the judge refused to read the defendants’ motions, then they would not have received a fair trial and prosecutors may have to start again.

Several attorneys who worked on the hearing in the Warm Sands case also said the recording may explain why they lost.

“I was always perplexed, because the hearing went so well, I thought he would rule in our favor,” said attorney Bruce Nickerson. “But he didn’t. I was never sure why. Now, I think it’s clear.”

“I was certainly baffled by the ruling. I still am,” said attorney Joe Rhea, who also worked on the Warm Sands case. “I thought it was just a bang-up motion, and there was never a clear reason for denying it.”

The sting operation was suspended in 2010, with the city deciding to improve lighting at the location and to send uniformed officers to patrol it. These are solutions that actually work, unlike undercover sting operations, which are more about making arrests and getting gay people on sex offender registries than stopping public sex.

Prosecutors in the case, presumably because of the evidence of homophobia presented at the hearing, offered plea deals that kept the men off the sex offender registry.

The police chief also resigned as a result of the case, and the embarrassment from the hearing led to some reforms in the department.

“The Warms Sands case has changed Palm Springs,” Rhea said. “I haven’t seen a coordinated sting like this since Warm Sands.”