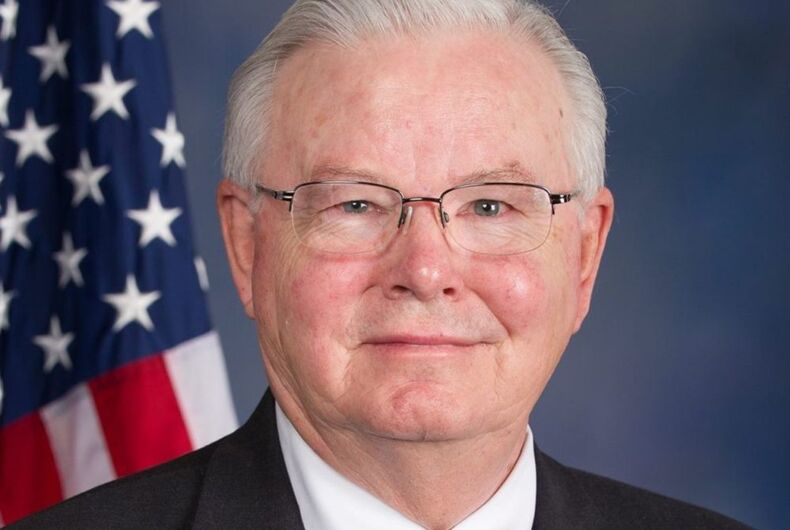 A conservative lawmaker out of Texas, Rep. Joe Barton, has apologized after a graphic picture of him emerged on Twitter from an anonymous account. In it, he appears naked, but portions are covered.

Barton, former chairman of the House Energy and Commerce committee and the longest serving member of Congress from the state, is running for re-election. There are now questions about his political future.

“While separated from my second wife, prior to the divorce, I had sexual relationships with other mature adult women,” he said. The inclusion of “mature adult women” in that sentence could be an attempt to differentiate himself from Alabama Senate candidate Roy Moore, who has been accused of sexual misconduct and assault against a number of teenage girls, one as young as 14.

“Each was consensual,” Barton said. “Those relationships have ended. I am sorry I did not use better judgment during those days. I am sorry that I let my constituents down.”

What is clear is Barton’s anti-LGBTQ voting record. He has voted against prohibiting job discrimination based on sexual orientation, on a Constitutional amendment banning same-sex marriage, and for a ban on gay adoptions in Washington, D.C.

As is so often the case with anti-LGBTQ politicians, it seems he was more interested in the speck in his brother’s eye than the plank in his own, unless we missed the asterisk next to “Thou Shalt Not Commit Adultery.”

Barton, who once voted to only give federal aid to schools allowing voluntary prayer, hopes to continue his political career, where he will no doubt continue to legislate against our rights.

When asked by The Texas Tribune if he planned to carry on with his campaign, he seemed unsure.

“I am talking to a number of people, all of whom I have faith in and am deciding how to respond, quite frankly,” he told the paper.

A spokeswoman for Barton told the paper on Wednesday that he had no plans to resign, and had filed for re-election.