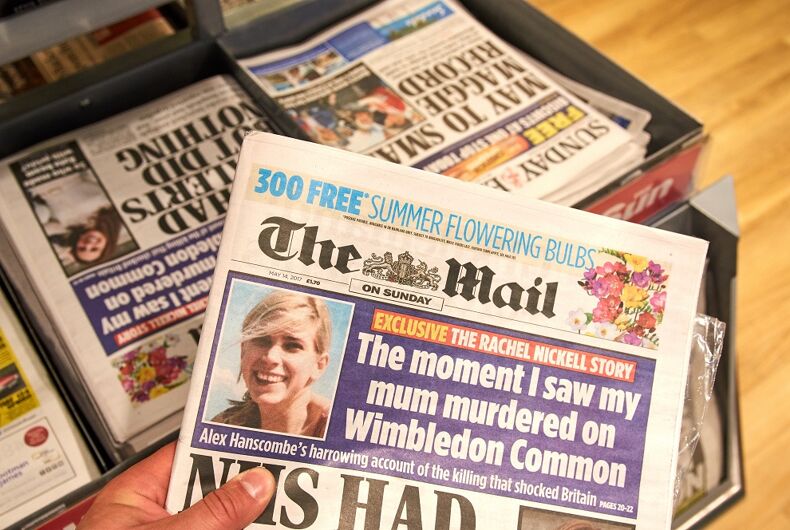 The Daily Mail, a sensationalist UK tabloid, published pictures of a young conservative activist kissing another boy, outing him to his family and leading to “mental health” issues.

For an October 4 article entitled “Not very conservative behaviour!” the Mail sent a photographer to follow people attending the Conservative Party Conference in Manchester as they went for a night on the town last weekend. The conservatives did super-exciting things like drink alcohol, sing karaoke, and dance.

Among the photos published by the Daily Mail were two pictures of two young men, kissing and then holding hands. The first caption read “Two men kiss on the streets of Manchester as young Tories make the most of the time in the city for party conference,” and the second caption said, “The two young men hold hands as they walk through Manchester as many young Conservatives let their hair down.”

One of the gay men in the photos is a 19-year-old delegate to the conference who was not out to many people. He told Pink News that he’s now “living in fear.”

“I don’t feel like I can even leave the house because of what people might say,” he said.

He said he didn’t know that a photographer was following him around. “I started getting messages from a friend asking if it was me and they linked me to it. That was first I knew about it.”

Now, everyone he knows has seen the pictures. “My grandparents have seen it, my parents, my friends and my work colleagues. I’ve had messages all day hassling me, I haven’t read them, I can’t bear to think what they say.”

He said that some people aren’t talking to him anymore. “My father, who speaks to me often, isn’t taking my calls. My grandparents haven’t said more than two words to me since they saw it this morning.”

“To be honest I’ve struggled with mental health for a long time,” he said. “I feel like I’m going back into crisis.”

Mike Freer, a Conservative Member of Parliament, condemned the outing. “It is wrong for the Daily Mail to out any gay man or women and the Party’s many gay activists should be able to take part in the Conference and enjoy it like every other delegate. No delegate, gay or straight, should have to worry about tabloids surreptitiously photographing them.”

The Mail has not commented on the story but it has removed the pictures in question.

While the Tories made a point this year to say that their party will do better on LGBTQ issues, their platform didn’t mention LGBTQ issues, even though the major leftwing parties’ platforms addressed issues like school bullying, hate crimes, and HIV treatment funding.