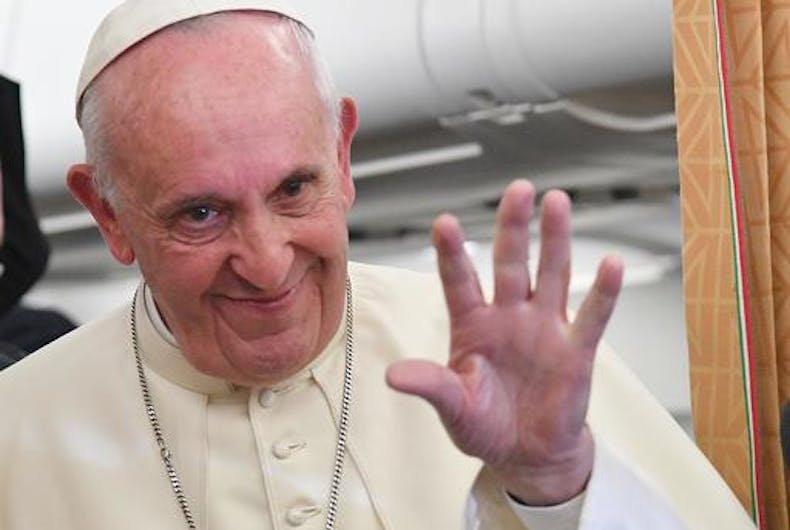 [S]ome people continue to defend trickle-down theories which assume that economic growth, encouraged by a free market, will inevitably succeed in bringing about greater justice and inclusiveness in the world. This opinion, which has never been confirmed by the facts, expresses a crude and naive trust in the goodness of those wielding economic power and in the sacra­lized workings of the prevailing economic system.

Pope Francis, in his 2013 Apostolic Exhortation Evangelii Gaudium, asserted his firm demand that the problems of massive structural income and wealth inequality must be met with swift and appropriate measures “by rejecting the absolute autonomy of markets and financial speculation.” If we do not meet this crisis, he continued, we will not be able as humans to solve any of the world’s major problems.

The Pope was particularly critical of unfettered Capitalist economies in his unusually descriptive remarks at a sermon delivered in Bolivia in the summer of 2013 in which he quoted Saint Basil the Great:

[B]ehind all this pain, death, and destruction, there is the stench of what Basil of Caesarea called ‘the dung of the devil. An unfettered pursuit of money rules. The service of the common good is left behind. Once capital becomes an idol and guides people’s decisions, once greed for money presides over the entire socioeconomic system, it ruins society, it condemns and enslaves men and women, it destroys human fraternity, it sets people against one another and, as we clearly see, it even puts at risk [with pollution resulting in climate change] our common home.

Well, the Republicans are at it again serving up the dung of the devil with the so-called “trickle-down” – or more formally referred to as “supply-side” – economics in the latest incarnation of their tax reform plan, which President Trump hinted amounts to essentially a tax reduction, especially for corporations and super-rich individuals and families.

As theory has it, by lowering corporate tax rates, business will have more capital to invest in its operations. This will supposedly create more jobs, which, in turn, will place more money into the pockets of consumers. As they spend more, overall economic growth will rise substantially, thereby generating more tax revenues to fill government coffers, which will steadily decrease the deficit. Then everyone will live happily ever after, chasing rainbows and unicorns while singing “Kumbaya.”

In economic and political discussions and strategies within many democracies around the globe, the battle lines have clearly solidified over competing ideologies separating not only individuals, but also differentiating entire political parties regarding the structure and purpose of government.

One argument rests on the ideas of John Maynard Keynes, a bisexual British economist who theorized that economic growth and reduced unemployment can be supported through governmental fiscal policies, including spending to stimulate the economy, adjusting interest rates, and enacting certain regulations on market economics.

Another and competing philosophy has come to be known as “neoliberalism,” which centers on a market-driven approach to economic and social policy, including such tenets as reducing the size of the national government and granting more control to state and local governments; severely reducing or ending governmental regulation over the private sector; privatization of governmental services, industries, and institutions including education, health care, and social welfare; permanent incorporation of across-the-board non-progressive marginal federal and state tax rates; and possibly most importantly, market driven and unfettered “free market” economics.

Noted economist, John Kenneth Galbraith, argued, however, that “trickle-down” economics has been tried and has failed several times over the span of U.S. history, and most notably under the Presidency of Ronald Reagan. Galbraith stated that it was once referred to as “horse and sparrow theory” in the 1890s. He wrote about David Stockman, Director of the Office of Management and Budget, 1981-1985, under the Reagan administration:

Mr. David Stockman has said that supply-side economics was merely a cover for the trickle-down approach to economic policy — what an older and less elegant generation called the horse-and-sparrow theory: ‘If you feed the horse enough oats, some will pass through to the road for the sparrows.’

Well, possibly the Pope got it wrong since the horse is most certainly not the devil.

Colton Haynes just got married in a beautiful ceremony