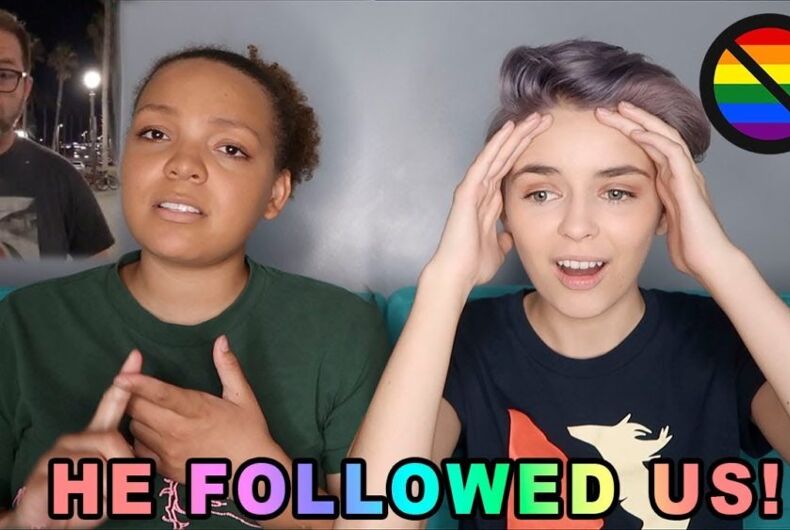 A young lesbian couple was harassed by an angry, homophobic Trump supporter, and it was all captured on video.

Jessica Lundquist and Tiffany Steinberg say they were walking along the Huntington Beach Pier, in California, holding hands on Sunday when a man approached.

The couple, who as it happens held hands for the first time in that same location two years previous, said the man got “uncomfortably close” and started in on them immediately.

Lundquist told OC Weekly that “he said that we were ‘unnatural’ and we were going to hell for our actions.”

Steinberg had her phone out, as she was going to Snapchat something before the man approached, and after their attempts to get away from him proved unsuccessful, she began filming.

He can be seen in the video that she posted to Facebook following them and espousing homophobic rhetoric, while the young women to be left alone.

Steinberg starts yelling, “I’m gay!” at one point, in order to draw attention and hopefully support from witnesses, concerned that the man could be dangerous.

When a woman approaches, and accuses the man of harassing the couple, he claims to be a criminal defense attorney, and says that harassment is a “very subjective term.”

The man gives permission to be filmed, and for the video to be uploaded, claiming he wants to get his message out.

When told that no one agrees with him, he counters with, “they do actually, this is the Trump era and you’re going to see a whole lot of things changing.”

Eventually he wanders away.

“I felt that just says a lot about where the country’s headed,” Lundquist said, although adding that the support she has received since has made her feel better.

The video has gone viral, helping to track down the identity of the man, revealed to be Anthony Allan Miskulin, a 38 year-old Trump supporter who was also recently filmed harassing a man on a bus.

A Facebook commenter, Alec David Bauer, claimed to have gotten into a similar confrontation with Miskulin after he went after another lesbian couple who were holding hands, as well as telling his “autistic mute friend he was going to hell.”

Miskulin commented on the video as well, telling Steinberg he would see her in court, despite giving permission to be filmed and for the video to be posted.

Oh, and he’s not an attorney.

Lundquist and Steinberg have made a video discussing the incident, and asking people to leave Miskulin alone now that justice appears to have been served.

How your shoes can influence your view on civil rights