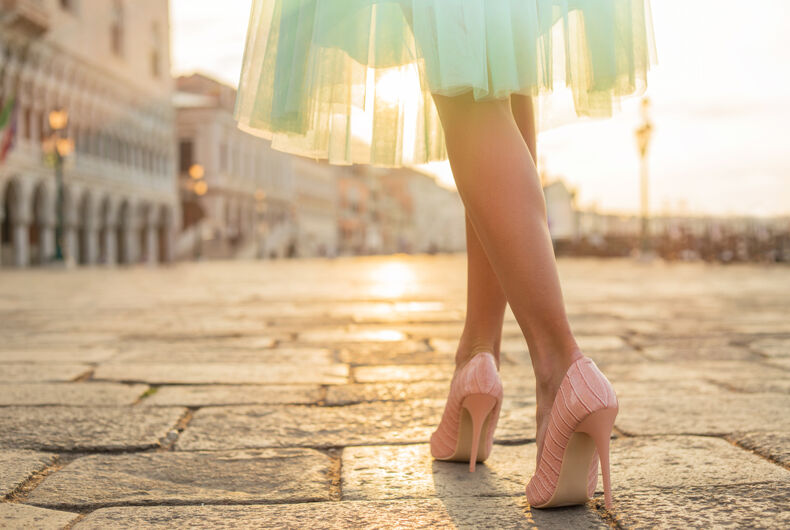 When asked by Jane Schmidt, student coordinator of the Gay/Straight Alliance at Waverly High School in Waverly, Iowa on November 30, 2011 “Why can’t same-sex couples get married [throughout the United States]?”, ultra-conservative U.S. Representative from Minnesota, Michelle Bachmann, responded that gay and lesbian people should have “no special rights” to marry people of the same sex, insisting that “the laws are you marry a person of the opposite sex.”

In this discussion, Bachmann exhibits a basic misunderstanding between the terms “equal” and “equitable.”

In her argument, Bachmann is saying that we all are being provided with a pair of shoes, and she is indeed correct. If you happen, for example, to wear a size 10 men’s or women’s shoe, and you are given a pair of size 10 shoes, all is possibly fine and fair if the shoes fit comfortably and you like the style and shade.

However, how fine and fair is it for those who do not wear a size 10 shoe at all?  Though we can equally attempt to fit into these shoes, when we struggle to walk, we either inadvertently step out of the shoes and possibly fall, or we develop bruised and battered feet.

Let’s look at the following analogy to Bachmann’s argument. Prior to 1967, nine states within the U.S. prevented consenting adults from engaging in sexual activities, let along marriage, with anyone from another so-called “race.”

In the case of Loving v. Virginia, 388 U.S. 1 (1967), the Supreme Court of the United States, however, disagreed with the above scenarios codified in law, ruling against equality and in favor of equity. They declared the state of Virginia’s anti-miscegenation statute, the “Racial Integrity Act” of 1924, unconstitutional, thereby overturning Pace v. Alabama (1883) and ending all race-based legal restrictions on adult consensual sexual activity and marriage throughout the U.S.

The plaintiffs in the case were Mildred Loving (born Mildred Deloris Jetter, a woman of African descent) and Richard Perry Loving (a man of white European descent), both residents of Virginia who married in June 1958 in the District of Columbia to evade Virginia’s “Racial Integrity Act.” Upon returning to Virginia, they were arrested and charged with violating the act. Police entered their home and arrested them while they slept in their bed.

At their trial, they were convicted and sentenced to one year imprisonment with a suspended sentence of 25 years on the condition that the couple leave the state of Virginia. At the trial, the judge, Leon Bazile, used Biblical justifications to convict the couple:

Almighty God created the races white, black, yellow, Malay and red, and He placed them on separate continents. And but for the interference with His arrangement there would be no cause for such marriages. The fact that He separated the races shows that He did not intend for the races to mix.”

In the case of marriage equality and interracial marriage, religious justifications were sited to deny people the right to shoes that fit.

Can we learn any lessons here? I say we can. Opponents of providing equitable treatment to transgender people, for example, argue that everyone must only use the restrooms of those of the sex that was assigned to them at birth. They claim that current laws are treating people “equally.”

By doing so, they are forcing trans people to walk with seriously calloused and bruised feet.