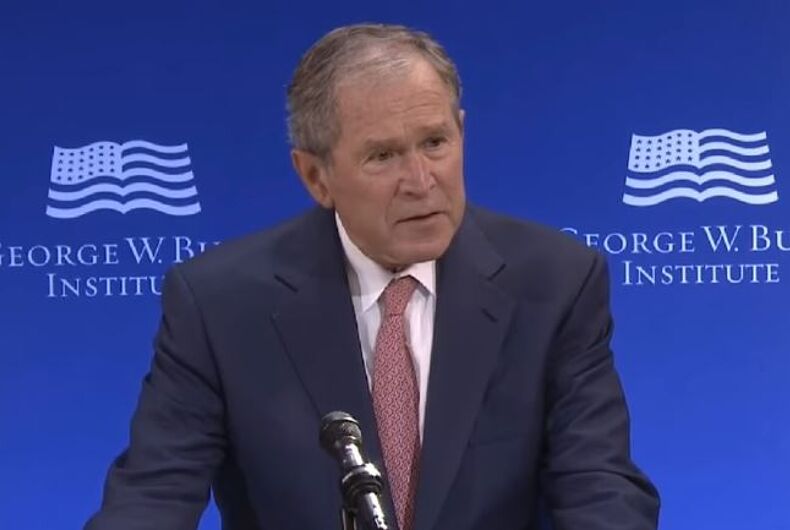 Former president George W. Bush took shots at President Donald Trump’s America on Thursday without ever even having to utter 45’s name.

Bush, speaking at the Bush Institute’s Spirit of Liberty event at the Time Warner Center in New York, called for unity and denounced bigotry, and the increased divisiveness we see in the current political climate.

Trump has received criticism from all sides for saying some of the white nationalists and white supremacists at the deadly Charlottesville hate rally were “fine people,” and for appointing avowed nationalists like former chief strategist Steve Bannon.

A recent feature by BuzzFeed News showed through leaked emails and text messages showed how Bannon’s Breitbart worked with neo-Nazis to bring in views and dollars.

“Bigotry in any form is blasphemy against the American creed and it means the very identity of our nation depends on the passing of civic ideals to the next generation. We need a renewed emphasis on civic learning in schools,” Bush said. “And our young people need positive role models. Bullying and prejudice in our public life sets a national tone, provides permission for cruelty and bigotry, and compromises the moral education of children.”

“The only way to pass along civic values is to first live up to them,” he added.

The swipes kept coming, with the blows clearly landing on Trump, and other inept and corrupt politicians.

“When we lose sight of our ideals, it is not democracy that has failed. It is the failure of those charged with protecting and defending democracy,” Bush charged.

“We need to recall and recover our own identity,” he continued. “Americans have great advantage. To renew our country, we only need to remember our values.”

He recognized the suffering taking place in the country, saying many were “angry” and “frustrated,” but asked that Americans not allow that to drive them apart.

“We’ve seen our discourse degraded by casual cruelty,” he said.

“At times, it can seem like the forces pulling us apart are stronger than the forces binding us together. Argument turns too easily into animosity. Disagreement escalates into dehumanization,” he continued. “Too often we judge other groups by their worst examples while judging ourselves by our best intentions, forgetting the image of God we should see in each other. We’ve seen nationalism distorted into nativism, [and] forgotten the dynamism that immigration has always brought to America.”

U.S. Ambassador to the U.N. Nikki Haley was in the audience. Hopefully she’ll bring the message back to Trump.

Watch some of Bush’s more pointed comments in the video below.

You can watch Bush’s full speech below.

It takes a lot of courage to be your true self, so we wanted to know about you