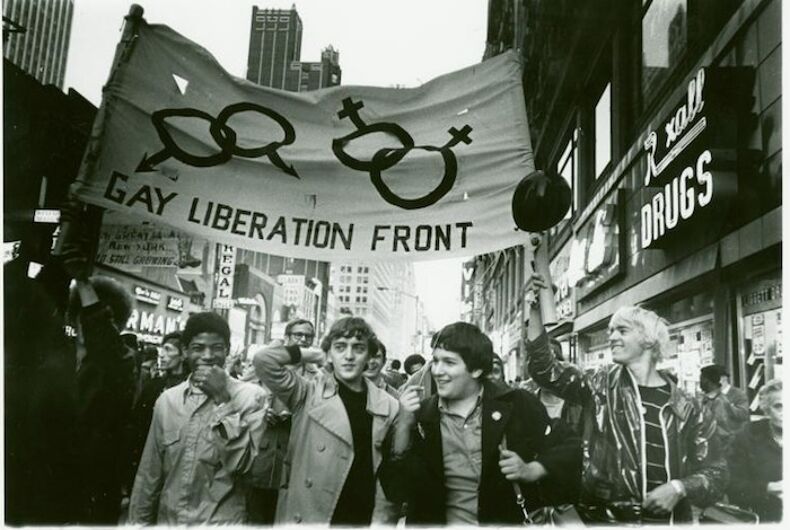 When I was in high school, my civics teacher complained that homosexuals “stole” the word gay.

I have no idea why he was talking about that, but he’s not alone. To listen to some straight people, it’s like they think that all the gays got together one day and voted on a word to replace “homosexual.” When “gay” got the most votes, we all laughed maniacally about how we were stealing straight people’s awesome word.

“Gay” came into English from French in the 13th century and meant “merry.” By the 17th century, according to Merriam-Webster, the word had taken on a second, sexual meaning: “rakish,” or sexually immoral.

This meaning led to expressions like “gay blade,” which is, as the Oxford English Dictionary puts it, “a dashing or lively man; a rake.” 18th century playwright Nicholas Rowe (who became Poet Laureate of the United Kingdom, so he was thoroughly mainstream for his time) referred to a character in one of his plays as a “gay Lothario” because he was a womanizer. The short 1904 film The Gay Shoe Clerk is about a very heterosexual shoe clerk who isn’t particularly merry – he’s “gay” because he kisses a female client he just met. By the 19th century, a “gay house” was a slang term for a brothel.

It’s from this very heterosexual sense of the term – not gay-as-in-merry – that it probably came to mean “homosexual.”

Merriam-Webster‘s theory is that gay-as-in-rakish led to the slang term “gaycat,” which referred to a young male hobo who worked with an older male hobo and may have had a sexual relationship with him. They cite a 1935 “handbook of underworld and prison slang” that includes an entry on the word “geycat,” defined as “a homosexual boy.”

But it’s possible that gay-as-in-rakish, with it’s antonym “straight,” came to mean “homosexual” through another queer subculture in the early 20th century.

Some of the first written uses of the word gay to unambiguously mean “homosexual” appear in the early 1950’s, which means that it was probably already slang among some gay people earlier than that. It appeared in books for gay people and occasionally in books written for straight audiences in the 1950’s and 1960’s, but the “merry” definition dominated while the “homosexual” meaning remained slang.

It wasn’t until Stonewall, the birth of the Gay Liberation Front, and increased gay visibility in the late 1960’s and 1970’s that the “homosexual” meaning became widely known. At the same time, the “happy” definition of the term fell out of usage.

There is no definitive explanation of why the “happy” definition stopped being used at around the same time as the “homosexual” definition became prominent. There’s really no reason people couldn’t use “gay” to mean “happy” today when, for centuries, it had multiple meanings. Even other words for people’s identities – like black, white, and straight – have multiple meanings.

The other common meaning of the word gay is “bad,” which comes from the “homosexual” meaning in the late 1970’s. If someone says that something is “so gay,” there’s no ambiguity. So even the word “gay” is perfectly capable of carrying more than one meaning today.

This story from 2010 provides some insight. A school in Australia changed a line in the children’s song “Kookaburra Sits in the Old Gum Tree.” The last line is “Gay your life must be,” and the school, tired of the kids bursting out in giggles at that line (but also refusing to just talk to the kids about why giggling at the word “gay” is all sorts of terrible), changed the line to “Fun your life must be.”

While the word “gay” can have multiple meanings, even today, none of those meanings can be positive because straight people think that being gay is shameful.

Like so many other things, it’s not gay people or homosexuality or LGBTQ culture that’s to blame, it’s homophobia. But I don’t expect people like my high school civics teacher to take responsibility for their attitudes.

Trump tells Pence to leave a gay wedding on ‘SNL’