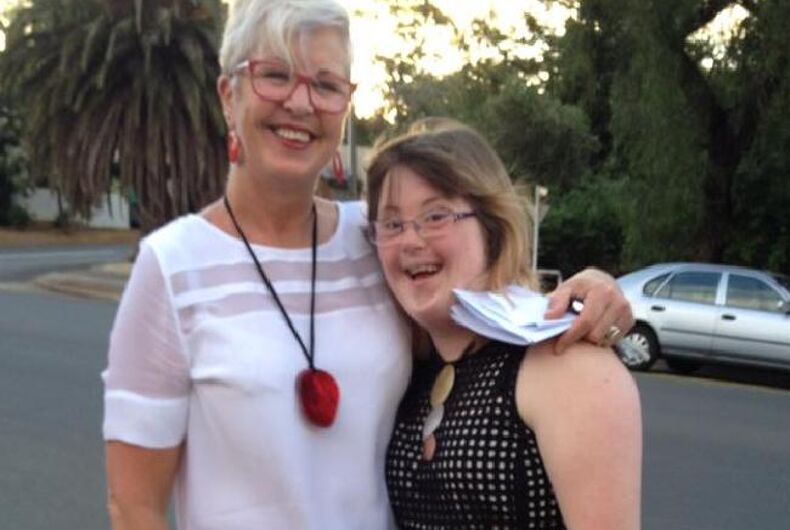 Many Australians are currently voting in a postal, non-binding referendum on marriage equality. Some, though, don’t even have the right to vote.

This includes many people with Down Syndrome.

Shea MacDonaugh, 31, wants to vote in the referendum, but the Australian Electoral Commission (AEC) won’t let her because, they say, they aren’t sure she understands what voting is.

“It hurt my feelings,” MacDonaugh told news.com.au. “People like us have a right to speak our own thoughts.”

She said that she was particularly interested in this referendum because she has a gay cousin. “She’s got a partner. Gay people have the right to get married and be in love with their partner,” MacDonaugh said.

It sounds like she understands the nature of voting just fine.

So MacDonaugh, who attended college for a few years, acted in the independent gay film Monster Pies, and co-facilitates sex education classes for people with disabilities, wrote a letter to the AEC to try to get her voting rights restored.

“With regard to your letter stating that you believe I do not understand the nature and significance of enrollment and voting, I can assure you I most certainly do!” she wrote. “I demand my right to vote and demand that I am placed back on the electoral roll as I requested.”

She is one of over 28,000 people barred from voting because of the “unsound mind provision,” part of a law passed in 1918. Under that law, people can be removed from the voting rolls if they have a signed statement from a medical professional.

Several years ago, MacDonaugh had herself removed, thinking that she did not understand the voting process enough. “At the time we thought it was the right decision for her,” her mother said. “Looking back now it was obviously not a good move.”

In the U.S., 30 states and the District of Columbia have laws that allow courts to take away the right to vote from people who have been declared “mentally incompetent.” Laws vary from state to state and are not limited to people with Down Syndrome.

Court rules against Christian videographers who wanted to discriminate