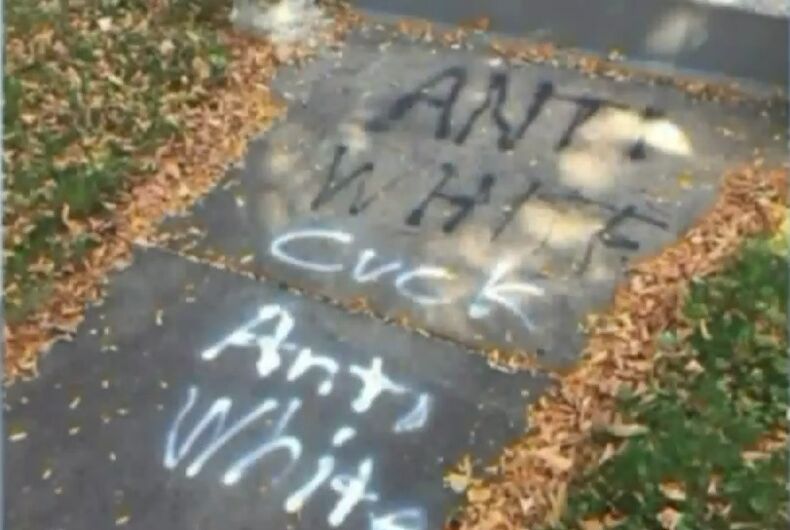 Jeff Zacharias and Bradd Easton share a home in the northside Chicago neighborhood of Lincoln Square with their daughter. In their front yard, they have a sign that says, “Here we Believe Love is Love, No Human is Illegal, Black Lives Matter, Science is Real, Women’s Rights are Human Rights, Water is Life, Kindness is Everything.”

On Sunday morning, Zacharias found that the sign had been spray-painted over. On the sidewalk in front of the stairs leading to their door, “anti white cuck anti white” was painted in black and white.

He looked at his neighbors’ houses to see if any others were targeted, and he found that one “Black Lives Matter” sign had been spray painted.

Easton took pictures of the vandalism and then the couple went to work cleaning it up. They posted more signs that said “Hate has no home here.”

“We feel attacked and unsafe in our own home and neighborhood,” Easton told the Windy City Times. “This can happen to anyone in any neighborhood across America, especially in today’s political climate. We urge everyone to speak out and fight this hate with love and kindness.”

Several blocks away, Kat Hindmand and Jennie Brier found that a sign outside their door was spray-painted over in white. The sign reads “Hate has no home here” in multiple languages.

“It was sad and unsettling to discover that someone vandalized our message of acceptance,” Hindmand said. “However, people of color are confronted by racist acts, often much worse than this, every day.” She posted images of the graffiti on social media and several of her neighbors have put up the same sign in solidarity.

Zacharias said that he’s not deterred from speaking out against hate. “This I think gives us the push to fight even harder, and resist as they say, and I think we’ll have bigger forces because of it,” he told WGN 9.

This isn’t the first time white supremacists have targeted the neighborhood for vandalism. Last month, around 500 people marched against hate in Lincoln Square following a spat of racist graffiti.

Professional athletes are standing up for patriotism by taking a knee