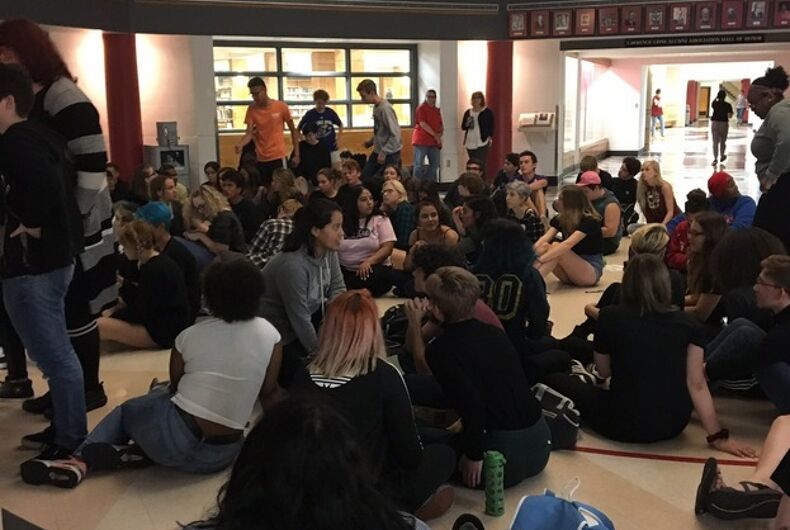 Students who sent hateful messages to hundreds of other students at Lawrence High School in Kansas will face disciplinary action following a protest at the school.

About 200 students were part of a senior class group conversation on the messaging app GroupMe. At first, the conversation was about clothes, but then some students made transphobic remarks. One student said, “if a tranny fights you is it still hitting a woman or no.” Another student shared a graphic that implied that transgender identities are “mental disorders.”

The Lawrence Journal-World reports that a student in the conversation insisted that gender is only determined by one’s birth certificate.

Students reported the incident to administrators, who did not punish the football players who made the comments. They were allowed to play at a football game on Friday last week.

Sophomore Elliott Bradley, events coordinator of the school’s Total Equality Alliance (TEA), said, “LHS is valuing their players over their minority students” by not punishing the students who sent the messages. So he organized a protest.

On Monday, Bradley and several other students met with assistant principal Mark Pruet in the morning to say that they would not leave the school’s rotunda until their demands were met. “We, as a group, sat down in solidarity and said, ‘We are not going to move until action is taken,’” Bradley said.

While administrators insisted that they could not do anything about conduct that takes place outside of school, the protestors pointed to the school’s “Philosophy for the Student Athlete.”

The philosophy says that participating in sports is “a privilege, not a right.” “With that in mind, the student-athlete must realize all actions on and off the field is a direct reflection of the entire school community. You will be looked upon as a role model.”

The protestors also wanted a written apology, administration to take on discrimination issues, and a panel for making decisions about incidents of discrimination.

The protestors said that this wasn’t an isolated incident. Senior Raven Andersen-Rolland said that she and her girlfriend were once kicked by a group of students who used anti-gay slurs during an assembly.

She said that nothing happened after she reported the incident. “I found out later that the boys were on the baseball team and they were not given a detention,” she said. “They continued to talk about us in the halls. They weren’t suspended from any games. Nothing was taken away.”

At the protest, the TEA handed out badges and ribbons. They had signs that said “trans rights = human rights” and “I shouldn’t have to be cis to be safe.”

The protest disbanded at around 3 p.m., with the protestors saying that some of their demands had been met. Superintendent Anna Stubblefield said that school policy had been violated and some students would face disciplinary action, although she said she could not comment on what that meant. The protesting students would not face punishment.

“There were things in (the chat) that were out of bounds and not OK, and they impacted the school day,” Stubblefield said. “When things occur outside of the school day, we typically are able to intervene and address it when it has an impact on what’s happening in the school day, and obviously we did that.”

About the general climate of the school, Principal Matt Brungardt said he did not know about other incidents that were brought up during the protest. “I feel like we can do a pretty good job of policing what we know,” he said. “If something happens and we don’t know about it, it’s pretty hard to do anything with it.”

The protestors, for their part, said this isn’t the end. “And if they ignore what we have expressed our concerns about, they know we’re going to do it again, whether in a sit-in or a forum,” TEA member Jonavan Shepard said. “But they know they can’t ignore it.”

Ellen DeGeneres: ‘I want a baby’