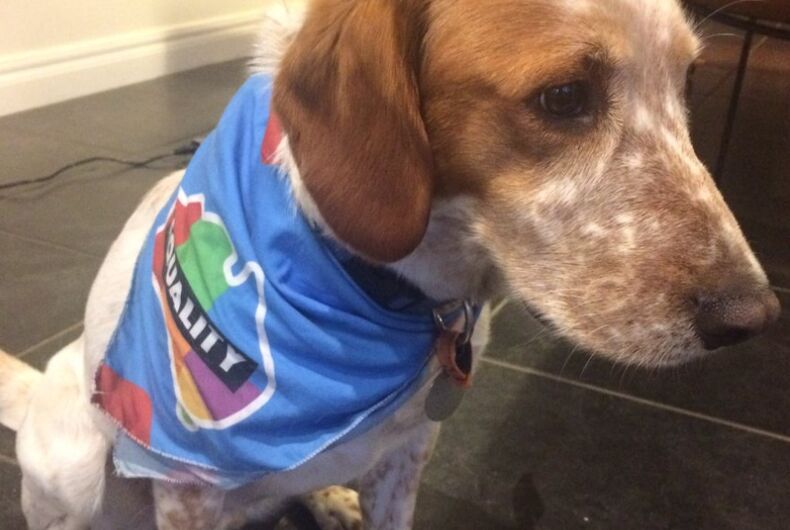 Herald Sun columnist Claire Sutherland’s dog Mack got a taste of what it’s like to be a gay human.

Mack was at a park this week in a suburb of Melbourne, Australia, wearing a bandana that said “Equality” on top of a rainbow-colored image of Australia. Dogs don’t have to be on a leash at this park, and the dog’s walker was nearby.

The dog was running around and approached a man who was sitting alone. According to Sutherland, Mack didn’t “rush him or jump on him,” but the man stood up and did a “fresh air kick” towards the dog.

He then went to the walker and shouted anti-gay slurs at her, including “perverted fucking poofter,” and made comments about the nonbinding referendum currently underway in Australia on marriage equality.

So some mouth-breathing cretin in the park tried to kick my dog while shouting homophobic slurs. Australia you have truly shat the bed. pic.twitter.com/ptPd5Oz0Rz

Every time I’ve written about some of the terrible behavior of anti-equality campaigners in Australia, I have been reminded of the pundits and politicians who pushed for the referendum and said that there would be a civil debate, despite warnings from LGBTQ organizations that a referendum would bring out an ugly element in the country.

Sutherland wrote that she was one of those pundits. “Like Pollyanna, I honestly thought we could have a respectful debate on this issue — perhaps because I am straight, and have never been the subject of prejudice or abuse,” she wrote.

But since support for equal rights for LGBT people is a proxy for acceptance of LGBT people, the most obvious tactic for the No campaign is to spread hatred of LGBT people.

It might be shocking, but it isn’t surprising that a man living in a country where a significant part of the population is being inundated with extremely homophobic messages would turn to violence to make a point about how much he hates gay people.

But even I didn’t expect people to take out their homophobia on dogs.

This trans teen was harassed on Twitter. Her comeback was brilliant.