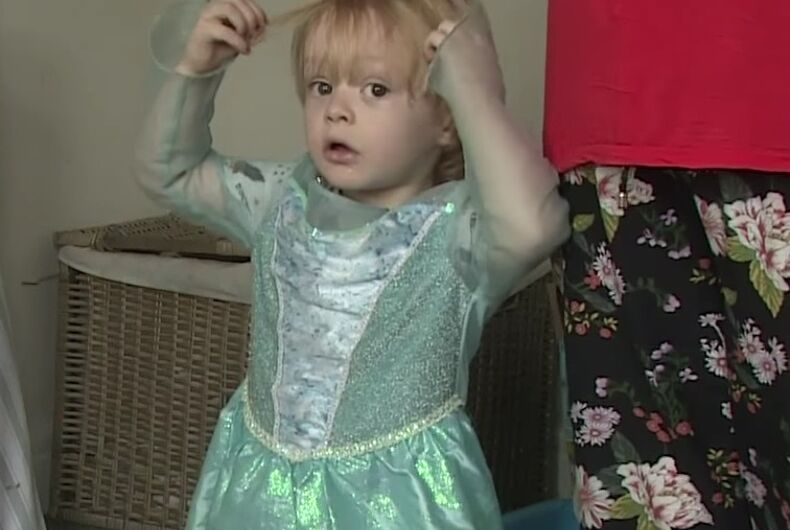 Hayley McLean-Glass’s three-year-old son Noah is one of the biggest fans of the Disney movie Frozen. He knows all the words to the songs, has all the toys, and loves to wear his Elsa dress all day.

So Hayley thought the perfect Christmas gift would be for him to go to Disneyland Paris for the “Princess for a Day” experience, where he could “wear a pretty dress, put make up on like Mummy does and have his photo taken being one of his beloved Disney princesses.”

When she tried to book it, though, she received an email from someone at Disneyland telling her that her son could not take part in Princess for a Day.

“At this time it is not possible to book Princess for a Day for a boy,” the email said. It went on to suggest that she buy a 300 euro gift pack.

On her blog this past Tuesday, she wrote an open letter to Disney: “What are you afraid of? What exactly will happen if a boy wears a dress? Will he burst into flames? Will he grow up to be *Shock horror* GAY and I might sue you for it?”

Later in the week, Disneyland Paris issued an apology, saying that the employee who initially responded to Hayley did not understand company policy. “An isolated incident, the cast member’s response is not reflective of any policy or belief held here at Disneyland Paris. We are going to ensure this does not happen again.”

Hayley said she doesn’t know whether she and Noah will go. “It just feels like it’s lost the magic,” she said.