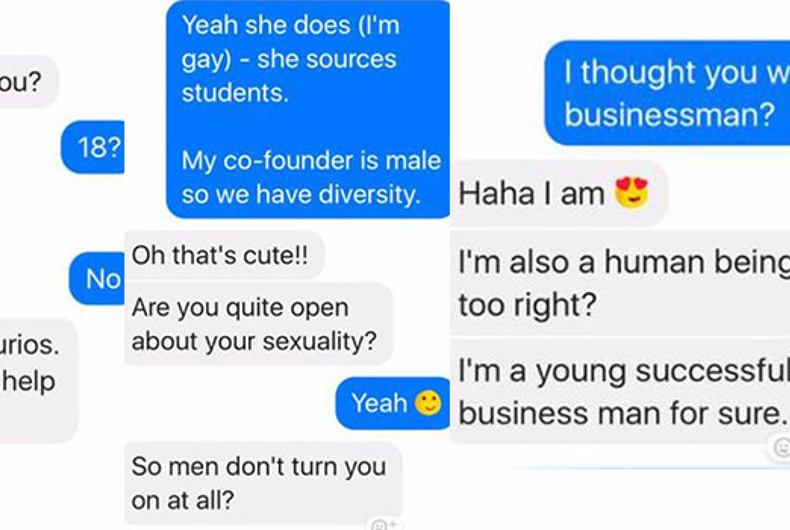 A young lesbian seeking career advice in the tech world ran into a problem many women in that environment report when she received a sleazy reply from a man who claimed he would help her.

18-year-old Lydia Jones posted the conversation to Twitter after contacting the male entrepreneur for some advice in getting her start-up Troops, based in the north of England, on more solid footing. She included screenshots of the conversation and said the tech world “needs to wake up.”

While the conversation started out professional, he soon turned the subject matter to her relationship status and sexuality.

Jones told Mashable she was finding it “very hard” to find people “willing to help” with growth and funding, and that she contacted the man after seeing him post in numerous Facebook groups.

“I simply asked him if he could introduce me to any mentors or advisors in London for growth and funding,” she said.

When she revealed that she was openly gay, he asked her if men turned her on “at all,” and later defended himself by pointing out that she said she was open about her sexuality.

“In the end I didn’t say much else because I found out it wasn’t appropriate to ask her even though she said she was open,” the man told Mashable.

He went on to criticize her for blocking him “without expressing how she didn’t appreciate that question. Very mature.”

Apparently he doesn’t realize that being blocked after he made things personal was expressing she didn’t appreciate the question quite clearly.

He then thanked her for “spreading his brand” since, “Richard Branson said all publicity is good publicity.”

As Mashable notes, a recent study showed that sexual harassment is all too common in the tech industry, and is part of the reason it remains so male dominated.

The study, published by the Kapor Center for Social Impact and Harris Poll earlier this year, found that one in ten women in the tech world face unwanted sexual attention.

Franklin Graham: Blame anyone but white supremacists & Trump for Charlottesville