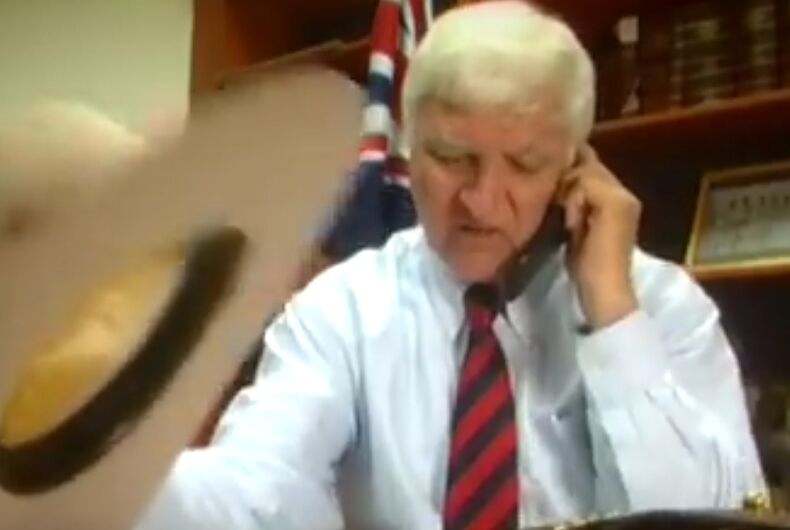 Bob Katter, a far right Australian Member of Parliament, is mad at Australian gay people for stealing “the most beautiful word in the English language.”

“I have a very clear idea of what is going on here: the homosexuals in Australia, they took the word gay,” he said on Sky News this week.

He noted that he got a “very, very high” score on his English matriculation – an exam at the end of high school – so he is clearly an expert on the history of the word “gay.”

“It was the most beautiful word in the English language, and they said, ‘Oh God we will take that word and we will have it as ours.'”

While his entire rant is ridiculous, I thought it was particularly bizarre that he picked on Australian gay people, as if American and British gay people wouldn’t have started to use the word that way if it weren’t for those thieving Australians.

Wikipedia has a pretty good summary of the origins of the word “gay” to mean someone who loves the same sex. Apparently there’s evidence from as early as the 1600’s that “gay” didn’t just mean “carefree” but sometimes had a sexual connotation, implying that someone slept around. Its opposite was “straight,” or someone with moral rectitude.

There is a line in Gertrude Stein’s 1922 novel Miss Furr & Miss Skeene where she possibly used the word gay to mean “homosexual,” and there are several examples of the word being used that way in mainstream publications from the UK and the US in the 1960’s.

So don’t blame those gay Australians.

Of course, no one has banned Katter from using the word “gay” to mean “carefree.” It was a word with two meanings for centuries, and it seems like the bigger issue here is that people dropped the “carefree” meaning, possibly because they didn’t want to use a word associated with homosexuality to mean anything positive.

If that’s the case, then homophobes have no one to blame but themselves.