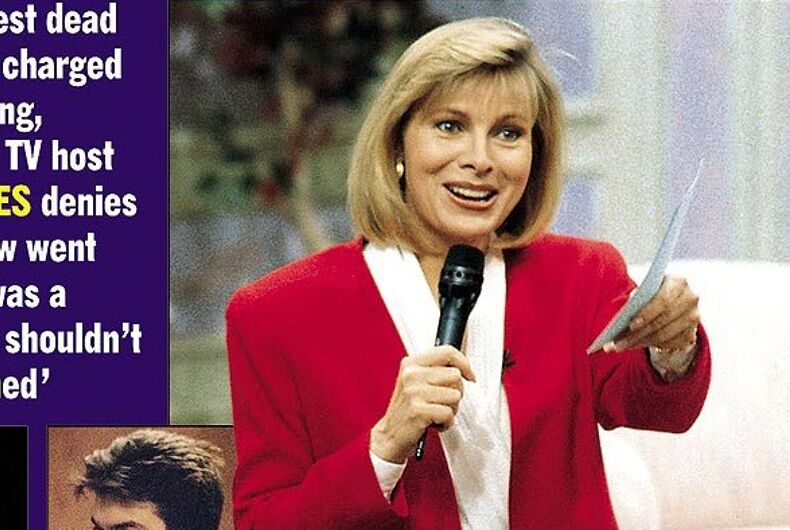 I have never been a fan of trash or “reality TV” but in the fall of 1996 I sat through 13 weeks of the three-ring circus that was the so-called “Jenny Jones murder trial” in Pontiac, Michigan.

At the time I was a gay student activist at nearby Oakland University, and the publishers of Between the Lines asked me to monitor and write about the trial since it was so close to campus. The trial impacted the course of my life forever.

Today Jonathan Schmitz was released on parole. By now many people know the topline details. Scott Amedure, a gay man living in metro Detroit, had a crush on Schmitz who said he was straight. Scott’s friend, Donna Riley, arranged for him to confess his secret crush on Jonathan on the Jenny Jones show in Chicago.

Jonathan completely agreed to go on this trip, paid for by the show. All along, Jonathan suspected that a gay crush was going to be confessed. He allegedly didn’t want this to happen on TV, but the possibility was really no surprise.

The Jenny Jones program provided guests with alcohol and hoped for some good television. After all, what could go wrong? There was alcohol, a homosexual crush, hope for humiliation, and all of this was only a few years after Geraldo Rivera has his nose busted by a chair throwing Klansman. This was the formula. Red flag number one.

Scott confessed his crush. Jonathan acted surprised. The crowd got a laugh and they all dispersed. What didn’t make the headlines was that Jonathan was on antidepressants at the time. If I recall correctly, he decided to go off his medicine, without telling his doctor, in order to afford some nice clothes for the fancy trip to Chicago. Red flag number two.

The episode never aired which is critical because Jonathan was never “humiliated” in front of a national audience.

Another major piece of this testimony at trial, that didn’t make a lot of news because the jury was excused (and possibly the media – I don’t remember), was that something intimate happened a few days after the taping. At a minimum it was likely kissing, but some testimony at trial suggested that Scott, Jonathan and Donna all may have ended up in bed together.

The day after the encounter Jonathan was hungover and a bit ashamed. He confessed to his father who shamed him further for the intimate encounter. Essentially his father took what might have been a simple indiscretion and turned it into a major embarrassment. Jonathan, without his meds, humiliated by his father, and possibly doubting his own sexuality, began planning the murder of Scott Amedure. Red flag number three.

Scott left a note at Jonathan’s place, potentially referencing something about their encounters over the prior 3 days. The note may have played a role in exacerbating the drama. Red flag number four.

Jonathan got bullets from one location and a gun from another – plenty of time to think things through and calm down from a “heat of the moment” impulse. Instead, he went to Scott’s home and with a shotgun and pumped bullets into him – spraying bullet fragments all over his body, puncturing several major organs, and leaving him to struggle for several minutes before dying. We heard the 911 tape in trial and they were gut wrenching.