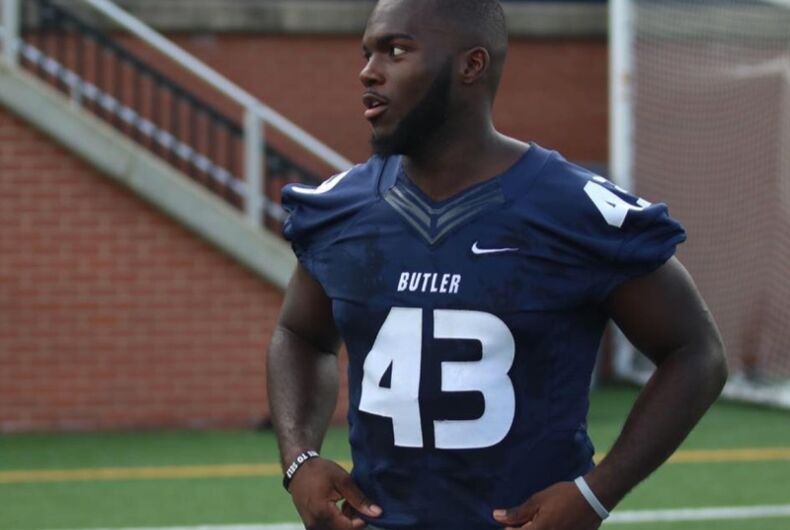 Xavier Colvin isn’t your usual college football player. The Butler University student is the son of two time Superbowl champion Rosevelt Colvin faced a difficult choice: continue to struggle with stereotypes of “real men” in sports or be honest about who he is. He chose to be a real man, but in his own way.

He stood up on a stage in front of his entire team and came out as gay.

In a moving story in OutSports, Colvin tells his story from struggling with his sexual orientation to being out and proud.

As a young gay football player with precious few examples that felt like him, merging football and being gay in his own head was difficult.

“A lot of times when it comes to gay men in sports we feel like people think we will be ‘less-than’ because of our personal life. I got so caught up trying to please others that I fell into a path of always trying to help others and not myself. Finally I became courageous enough to be myself.”

As he came out to a couple teammates and friends earlier this year, the fog lifted from his eyes.

But how did the team react? Colvin proudly reports that he didn’t get one negative comment. He had the full support of his coaching staff and teammates.

“Afterwards I got texts and phone calls,” Colvin told OutSports. “The freshmen who didn’t know me came and shook my hand. And they all said, ‘we’ve got your back.’ They told me how proud they were of me. Not even a single negative reaction. It was all positive.”

A half dozen college football players have come out this year.

Living in the shadow feels like the safe place to be No harm for them, no harm for me But life is short, and it's time to be free Love who you love, because life isn't guaranteed 🌈 -Gloria Carter #lgbtbabes