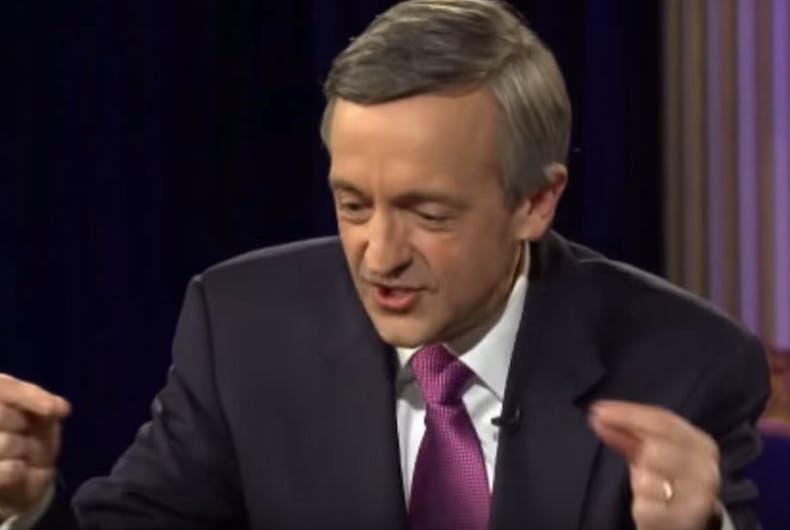 Robert Jeffress, explaining how sex works by jabbing his fingers together.

Commenting on Donald Trump’s declaration that North Korea will face “fire, fury and, frankly, power, the likes of which this world has never seen before,” Texas megachurch pastor Robert Jeffress said, “God has given Trump authority to take out Kim Jong Un.”

Trump’s comments caused a stir and foreign policy experts considered them “exactly wrong” since they will inevitably be used as propaganda to increase hostilities between two countries with nuclear weapons.

The Washington Post asked Jeffress how he squares his support for massive death with the pacifist tone of the New Testament. Jeffress, who presided over a service for Trump’s family at the Inauguration, said that the message of nonviolence is for “Christians,” not for the government.

He went on to say that he really doesn’t want the government to follow Biblical principles. “A Christian writer asked me, ‘Don’t you want the president to embody the Sermon on the Mount’?” Jeffress said, referring to Jesus’ longest sermon in the Bible where he advocates, among other things, helping the poor.

“I said absolutely not.”

Well, then. Maybe you could stop using the Bible as a justification for your political beliefs? Jeffress is (of course) a major homophobe, and has relied on God in the past to explain why gay people are terrible.

Jeffress points to Roman 13 for justification. That passage says that God created government, so people should follow the laws that government creates. It goes on to say that the government is allowed to punish people who don’t follow those laws.

“That gives the government to the authority to do whatever, whether it’s assassination, capital punishment or evil punishment to quell the actions of evildoers like Kim Jong Un,” Jeffress said.

Except no. That passage is clearly referring to the people who live within a nation following the laws of that nation. Since the president of the US is not the emperor of the world, Romans 13 doesn’t provide much guidance on how Trump should react to North Korea’s nuclear weapons development.

This same pastor is also famous for comments calling Islam a violent religion. My guess is that he sees no contradiction in saying that Islam is violent based on the actions of a few Muslims while he uses the Bible to advocate violence “the likes of which this world has never seen before.”

Jeffress’s comments show that conservative Christians usually decide on their policy preferences first and then look for support in the Bible later.

It would be nice if they had more self-awareness.

Here’s Jeffress, explaining how gay sex is like plugging your TV into the wrong socket so it’ll make you explode, or something.