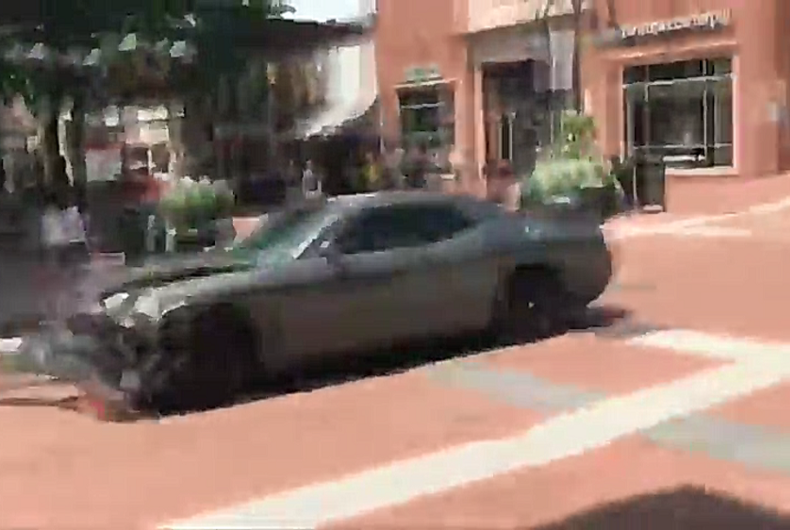 One person is dead and nineteen are injured after a car drove through a counter-protest in Charlottesville, Virginia, today.

A counter-protest was organized by local church leaders and activists after a white supremacist rally was announced by Unite the Right. The protest attracted the Ku Klux Klan, neo-Nazis, and other fringe-right groups, while Black Lives Matter and other anti-fascist groups attended the counter-protest, waving signs condemning hatred.

“Yeah, it was intentional,” Dan Miller, who was at the counter-protest, told the New York Daily News. “About 40 miles an hour, hit about 15-20 people, crashed into the two cars in front of it, and then backed up and sped away while cops were standing on the side of the road and didn’t do anything.”

AP photographer Pat Jarrett also witnessed the attack. “A gray Dodge Charger ploughed into a sedan and then into a mini-van. Bodies flew. People were terrified and screaming. Those closest to it said it was definitely a violent attack. The driver, who people later described as a skinny white guy with a straggly beard, reversed out of there and drove off, the front-end of his car all smashed up.”

Governor Terry McAuliffe has declared a state of emergency in Virginia. Donald Trump condemned the violence “on many sides” at a press conference in New Jersey and posted the same sentiment on Twitter.

We ALL must be united & condemn all that hate stands for. There is no place for this kind of violence in America. Lets come together as one!

Trump and the right spent years condemning Barack Obama for not using the expression “radical Islamic terrorism” to describe violence perpetrated by groups like ISIS and Al Qaeda. Trump cannot bring himself, though, to condemn white supremacist violence.

The rally was held to protest the removal of a statue of Robert E. Lee from a city park. The city council voted to remove the statue in February.

White supremacists chant ‘F*** you, f****ts’ at rally in Virginia