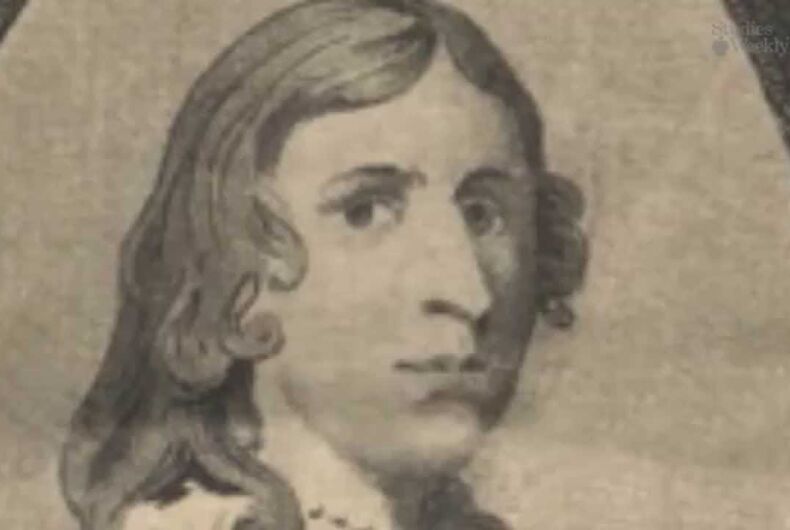 Among the small number of women documented as experiencing military combat during the American Revolutionary War is Deborah Sampson, often said to be the first American woman to disguise herself as a man to join the Army. Serving 17 months as Robert Shurtleff, she was wounded in 1782 and later received a military pension.

Deborah was the eldest child and had at least five other siblings. As the family grew, funds to support the family did not, and they slipped into poverty. With the belief that Jonathan Sampson had become lost at sea off the coast of England in 1766, it became necessary for Deborah’s mother to farm out her children to others for their care. Deborah was sent at age 5 to the home of the elderly widow of the Rev. Peter Thatcher and months later became an indentured servant to Middleborough farmer Jeremiah Thomas.

At the Thomas farm, Deborah did both women’s and men’s work, including helping with the housework and working in the fields. Hard labor developed her physical strength. While there, she also learned to shoot a gun during hunting trips and became an expert shot.

During the winter, with less work on the farm, Deborah would follow Thomas’ 10 sons to school and, when her servitude ended in 1779, she was hired as a teacher in a Middleborough school where she taught for six months. To make ends meet, she did spinning and weaving work for the locals.

With the Army offering cash bounties for signing up during the American Revolutionary War, Sampson responded by dressing in men’s clothes and enlisting under the name Thomas Thayer. Now as Thayer, she never showed up for muster.

The next month, on May 20, 1782, Sampson again dressed in men’s clothes and enlisted under the name Robert Shurtleff. She signed up for a three-year stint, using the name of her mother’s son who had died as a child — Robert Shurtleff Sampson. Muster Master Noah Taft paid the new recruit a bounty of 60 pounds. Three days later, in Worcester, Mass., Shurtleff and 49 others mustered into the Light Infantry Company of the Fourth Massachusetts Regiment led by Capt. George Webb.

The risk of Shurtleff’s original gender being discovered was always present. In fact, Robert Shurtleff suffered his first severe wounds at a battle in East Chester. He recalls it, “I considered this as a death wound, or as being the equivalent of it, as it must, I thought, lead to the discovery of my sex.”

With a gash from a saber to the head and two musket balls — one to the upper left front thigh — Shurtleff received treatment for the head wound by a French doctor at the field hospital. He later quietly slipped away and removed one of the musket balls with a penknife and sewing needle. The other was too deep to remove and never healed properly. After all this, his gender secret remained intact.

Ultimately, Shurtleff’s identity was discovered in 1783, while being treated for a fever in Philadelphia by Dr. Barnabas Binney. He kept the secret and allowed Shurtleff to stay at his home where he received better care. After recovery, Binney met Shurtleff’s commanding officer, who ordered Shurtleff to carry a letter to Gen. George Washington. With the war winding down after the signing of the Treaty of Paris, that letter paved the way for Shurtleff’s honorable discharge at West Point on Oct. 25, 1783.

After discharge, Deborah Sampson married Benjamin Gannett in April 1785. They had three children: Earl, Mary and Patience. On Jan. 20, 1792, Sampson won a long legal battle for back pay not received for her service in the army. Since she “did actually perform the duty of a soldier,” Sampson received 34 pounds in a lump sum from the Massachusetts State Legislature. It stated: “The said Deborah exhibited an extraordinary instance of female heroism, by discharging the duties of a faithful, gallant soldier, and at the same time preserving the virtue and chastity of her sex unsuspected and unblemished, and was discharged from the service with a fair and honorable character … ”

Sampson was proud of her military service, and in 1802 dressed in her military uniform and traveled throughout New England and New York giving lectures and demonstrations. Those lectures would include her wartime experiences and a demonstration of the manual of arms. This did not bring in enough money to sustain her family and even though her husband Benjamin worked hard during their life together, money continued to be a problem for the family.

In 1804, good friend Paul Revere, a hero during the war, requested on Sampson’s behalf that Congress grant a pension. He said, “I have been induced to enquire her situation, and character, since she quit the male habit and soldier’s uniform, for the most decent apparel of her own sex; and obliges me to say, that every person with whom I have conversed about her, and it is not a few, speak of her as a woman with handsome talents, good morals, a dutiful wife and an affectionate parent.

Revere’s support proved successful, and in March 1805 Sampson began receiving $4 a month from the Massachusetts Invalid Pension Roll. With Revere’s continued support, in 1816, she finally received a final pension settlement of $76.80 a year.

Prior to her settlement, Sampson’s life had started looking up in 1813 when her son Earl married Mary Clark. She was able to spend her final years with them in their spacious mansion at 300 East St. in Sharon, Mass. On April 29, 1827, Deborah Sampson Gannett died of yellow fever in the upper left bedroom of the mansion.

Sampson was buried at Rock Ridge Cemetery in Sharon. Her gravestone has this inscription on one side: “Deborah wife of Benjamin Gannett, died April 29, 1827, aged 68 years.” The other side reads, “The Female Soldier Service 1781-1783.” The Deborah Sampson Chapter of the Daughters of the American Revolution also erected a plaque in her honor near her grave.

Sampson’s husband died in 1837. One year later, the U.S. Congress passed the “Act for the relief of the heirs of Deborah Gannett, a soldier of the Revolution.” This granted a sum of $466.66 to be divided between the three children.

This article was originally published on Bilerico in 2011.

Why is the mainstream media ignoring the abuses of gay & bi men in Chechnya?