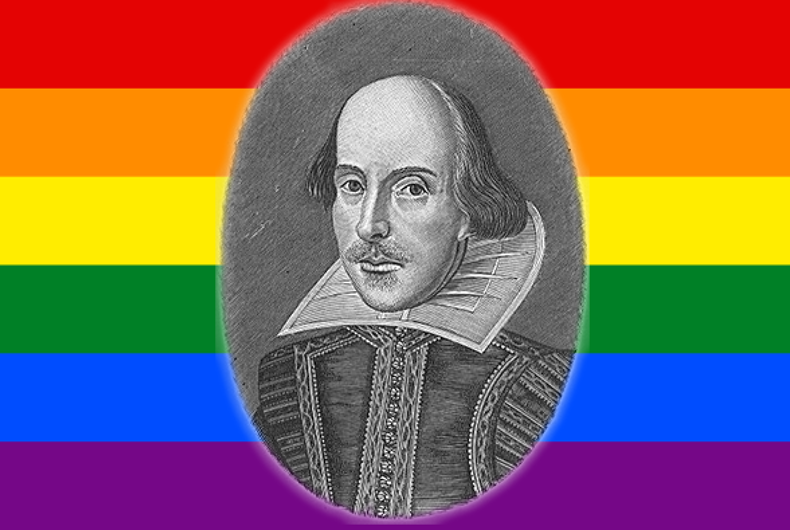 Shakespeare's sexuality has been a topic of hot debate for years, heating up in recent years.Photo: Public Domain, Composite by Jeff Taylor

Royal Shakespeare Company artistic director Greg Doran has waded into the long-running William Shakespeare sexuality debate, saying he believes the writer was gay and it is time for his gay characters to come out of the closet.

Doran made the comments while a guest on BBC Radio 4’s Today program.

“The growing understanding of Shakespeare, as I’ve worked with him over the many years that I have, makes me realize that his perspective is very possibly that of an outsider,” Doran said.

“It allows him to get inside the soul of a black general, a Venetian Jew, an Egyptian queen, or whatever, and that perhaps that outsider perspective has something to do with his sexuality.”

Before you say, well, sure, but he was a great writer, so it is only natural that he would be able to write from various points of view, Doran noted that this is far from the only evidence of Shakespeare’s possible queerness.

Doran conceded that Shakespeare fathered three children, but said that he believes the proof of the bard’s homosexuality lies within his famous sonnets.

Doran added that his “clearly gay” characters should not be portrayed as heterosexual, the Telegraph reports.

“I am just aware how many times Shakespeare has gay characters, and how sometimes those gay characters are not played as gay, and I think in the 21st century that’s no longer acceptable,” he said.

He added that the character of Antonio in The Merchant of Venice is “absolutely clearly in love with the young man Bassanio and sometimes that is kind of toned down” with the pair presented as merely close friends.

“Shakespeare was certainly not exclusively gay,” Sir Stanley Wells, a Shakespeare expert at the University of Birmingham, told the Telegraph, pointing out that he married a woman, Anne Hathaway, with whom he had two daughters and a son.

“But he was pretty certainly bisexual, and actively so,” Wells continued. “The strongest evidence comes from the sonnets, in some of which he writes of a triangular relationship with a man and a woman. Some people claim that these poems are fictional, but I think this is an evasion.”

The debate of Shakespeare’s sexuality will rage on, as will the one over whether he was a pot smoker, or whether he was even the person writing all those plays and sonnets in the first place.

Perhaps it’s only fitting that the king of drama should stir up so much of it some 400-plus years after his death.

This man’s proposal from 10,000 miles away will leave you speechless