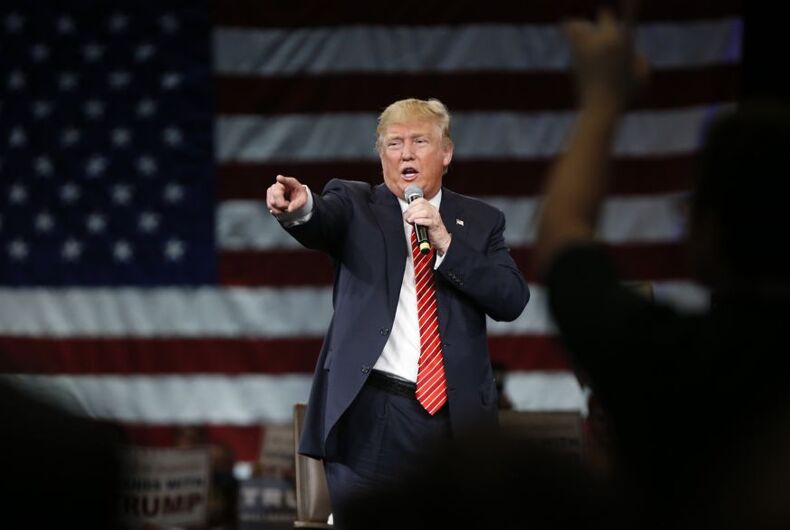 President Donald Trump filed to run for re-election on his inauguration day, allowing him to begin campaigning immediately.

He has already held a number of rallies, is still hawking merch, and is airing campaign ads talking up his many “accomplishments.”

If his new job approval ratings are anything to go by, he is going to have to start running a lot more ads, as the stink from his already scandal-ridden presidency appears to finally be setting in.

Gallup reported on Friday that Trump’s second quarter approval rating, at 38.8% is the lower than every other previous president. Only Bill Clinton was also below 50%, at 44% approval at this point into his first term.

Today, Gallup is out with a new report, showing Trump’s approval rating by state. It too looks grim for his re-election hopes. He enjoys above 50% approval in the states you’d expect, such as Alabama, Arkansas, Montana, and Kansas, and below 40% in similarly predictable places, like California, New York, and most of the New England area.

It gets more interesting in the “Rust Belt” region.

Trump largely owed his victory in the 2016 presidential election to his wins in three key Rust Belt states — Michigan, Pennsylvania and Wisconsin — that had not backed a Republican for president since the 1980s. In these states, his January-June approval ratings were just slightly above his overall average of 40%, including 43% in Pennsylvania and Wisconsin and 42% in Michigan.

Gallup goes on to state that “for [Trump] to successfully win re-election, historical patterns suggest his overall 40% rating would need to rise closer to 50%. He would also need to shore up his support in the key Rust Belt states that delivered the Electoral College win to him.”

Trump isn’t fairing well in other key swing states, either. His approval is in the 40-49% range in Florida, Iowa, Ohio, Nevada, New Hampshire, and North Carolina. It is below 40% in Colorado and Virginia.

How Trump could win anyway

While all of this should add up to a bleak picture for Trump’s re-election plans, this may be yet another example of the rules not applying to our current president.

Gallup had Trump’s favorable rating at a meager 34%, and it only rose to 42% the week after he won, in a country that loves nothing more than a winner.

And while a favorability rating and a job approval rating are not exactly the same thing, it is the closest approximation and should give some idea of how it is possible to win even when most people do not like you.

Granted, he was helped mightily by his opponent, Hillary Clinton, being viewed almost as unfavorably as he was heading into the election.

If the Democrats can find a more favorable candidate to run against him in 2020, and if the Trump administration continues to use derailing as its primary means of transportation, they could be in a good position to put a stop to any hopes of “Four More Years!”

Then again, if Trump’s phony election commission has anything to say about it, Democratic voter turnout could be historically low.

It may be crazy early, but the race for 2020 is already heating up. And why not? After all, nothing else about 2017 has felt normal.

This man’s proposal from 10,000 miles away will leave you speechless