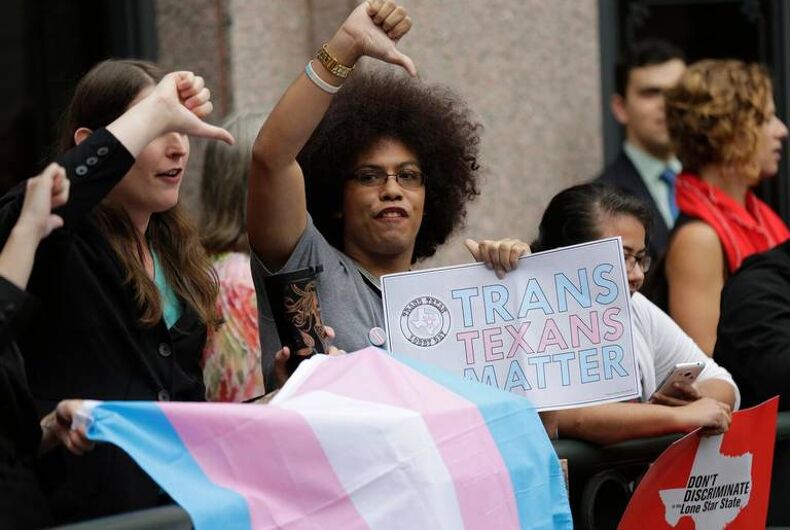 Texans protesting a similar piece of legislation, SB6, that would have restricted bathroom access for trans people. Now lawmakers are trying again in a special session. Photo: Eric Gay, AP

The Texas Senate staged an unusual midnight floor session Thursday as conservatives who dominate the chamber rushed to revive abortion restrictions, school vouchers and a “bathroom bill” targeting transgender people before opponents have time to mobilize against them.

Here it is: #SB3, the dangerous bathroom bill that will be debated on tomorrow AM in the Senate Affairs Committee. #TXLege #YallMeansAll pic.twitter.com/3K9VUnaFem

“Texas had the most anti-LGBTQ legislative session in the United States, and now, Gov. Abbott and Lt. Gov. Patrick are pushing their extreme agenda with this unnecessary, costly special session,” said JoDee Winterhof, senior vice president of policy and political affairs for the Human Rights Campaign. “SB3 and SB91 are a blatant attack on transgender Texans, and these bills would harm the state’s reputation, its people and its economy. This unconscionable legislation revives the most troubling parts of the anti-transgender legislation that already failed to become law during the regular session and doubles down on the governor and lieutenant governor’s desire to play political football with transgender Texans’ lives. We will be fighting against these harmful bills and any attempt to single out LGBTQ Texans.”

Senators passed bills allowing the Texas Medical Board and other state agencies to continue operating during the opening moments of just the third day of its month-long special legislative session.

“It’s a hurry because we have 30 days and 20 bills,” Patrick, a former conservative talk radio host who oversees the Senate, told reporters. He even brought pizzas for his colleagues before work began around 12:15 a.m.

Clearing those agency oversight measures allows the Senate to tackle more divisive issues at breakneck speed, hence the late-night session. Patrick plans to ram more hot-button bills through committee and floor passage in mere days, even if it limits public input and legislative debate. That pace doesn’t guarantee any will become law, though, since the Texas House is moving more slowly with plenty of time left in an extra session running through Aug. 18.

The usually non-controversial agency bills failed during Texas’ 140-day regular session that ended Memorial Day, in part because Patrick wanted to force an overtime session so lawmakers could approve conservative bills that failed earlier this year.

Republican Gov. Greg Abbott complied. He called the Legislature back to work in order to keep the agencies operating and then to tackle around 20 other priorities. Those include a “bathroom bill” requiring transgender people to use public restrooms corresponding to the gender on their birth certificates, even though North Carolina largely rolled back a similar measure it approved last year amid national outcry and threats of boycotts that could cost the state millions.

Texas’ version has caused a similar stir, with firms such as Apple and IBM joining the NFL and music and Hollywood stars to decry it as discriminatory.

The powerful Texas Association of Business, which has opposed anti-LGBT proposals for months, announced a $1 million radio advertising campaign on Thursday. It said the bathroom bill’s approval “would result in terrible economic consequences – on talent, on tourism, on investment, on growth, and on small businesses.”

Abbott, though, has shrugged off such concerns. He followed the Senate’s Thursday move by releasing a proclamation around 1 a.m. expanding the special session’s workload even further to include proposals to improve Texas’ school finance system, which the all-Republican state Supreme Court declared barely constitutional last year.

Patrick wants the entire slate to clear the Senate quickly, further solidifying his reputation among conservatives.

“If you are following the Texas Senate, get your running shoes,” Trayce Bradford, president of the conservative grassroots Texas Eagle Forum, emailed supporters Thursday. “If you are tracking the Texas House, you might want to grab a good book.”

But many of the items being revived lacked the votes to be approved previously, and still do. The state House, which like the Texas Senate is Republican-controlled, rejected the upper chamber’s version of the bathroom bill and instead approved a scaled-back version applying only to schools, which itself failed.

House members also repeatedly defeated Senate proposals on school vouchers, which provide public money to students attending private schools, and have been far warier of other issues such as encroaching on local governments’ power.

The House should find common ground with the Senate on some key upcoming issues in coming weeks, but won’t move as fast. Republican House Speaker Joe Straus opposes the bathroom bill and some of Patrick’s other top priorities, and the pair has feuded publicly for weeks, potentially further bottling up legislation.

Democrats, meanwhile, have decried a lack of Senate transparency but don’t have the votes to slow the chamber down. They note that protesters turned out in force to decry much of the same legislation during the regular session, and are accusing Patrick of trying to ensure they don’t have enough advance warning to do so again.