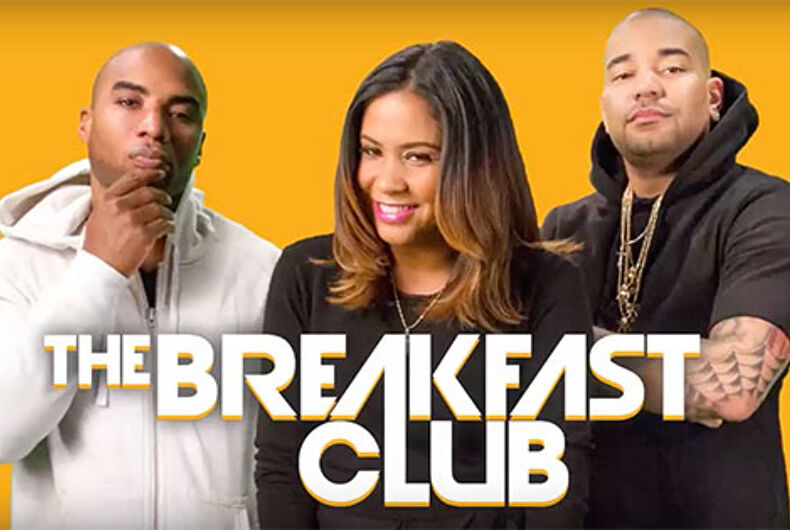 The outrage is in response to a comedian, Lil Duval, who made a guest appearance on the show last Friday and was asked what his reaction would be if he found out the woman he had sex with was transgender, after the fact.

“This might sound messed up,” Duval told the three hosts, “and I don’t care: she dying.”

He also said if he did learn he had sex with a transgender woman, he would then be gay — which left the implication that, even though a straight man engaging in sex with a woman could not possibly “change” anyone’s sexual orientation — it would be the worst thing, ever.

Here is the 1st part of the discussion about transgenders with @lilduval pic.twitter.com/OIT6cYn72X

But what the hosts did not do Monday was apologize for Duval’s remarks, nor did they expand on their view of what he said. Charlamagne repeatedly stated he was not responsible for “another man’s words” and after the show, he responded to our question why on Twitter:

News outlets from TMZ to the Washington Post covered the controversy Monday, as the hashtag #BoycottBreakfastClub trended.  Laverne Cox weighed-in, along with Janet Mock — who not only recently appeared as a guest on their show, but whose book was used as a prop and the butt of jokes that misgendered her. She wrote her response in an op-ed published Monday in Allure, titled “Dear Men of the Breakfast Club: Trans Women Aren’t A Prop, Ploy or Sexual Predators.”

Duval purposefully misgendered me (as the hosts laugh, thereby cosigning) in an attempt to put me in my place and erase my womanhood. Their fragile masculinity would not allow them to recognize a simple truth: I am an accomplished, beautiful black trans woman. Your willful ignorance will not stop me from being exactly who I am. My sisters and I are here and we exist, and you will not diminish our light and our brilliance.

Charlamagne admitted he laughed at what Duval said about Mock — “that n***a doin’ his thing” — and didn’t think he needed to apologize for misgendering her.

Here is the 2nd part of the discussion about transgenders with @lilduval pic.twitter.com/o7gq0zs1P5

Ironically, Charlamagne is executive producer and cohost of a program called “Online Feud” on MTV. Press reps for MTV did not return calls for comment about the online feud he and his radio cohosts are engaged in. Calls for comment to iHeart radio station 101.5 in New York were also not returned.

Some folks think it's ok to joke about wanting to kill us. We have free speech but that speech has consequences and trans folks are

Listeners selected to be heard on the air were all in agreement: the show’s beloved hosts were not responsible. And they said as much on Twitter as well, many of them using transphobic slurs and quoting the Bible.

But rape by deception is ok?

Why say it again? What would be the purpose? It wouldn't be authentic.

Fuck that bro if you was dude before I want no parts y'all on some nut shit I'm wit @lilduval 🤷🏾‍♂️ https://t.co/L6LNzBut4y

People are so straight phobic https://t.co/PTbiYDj9JB

Charlamagne surely knew about this backlash, given that transgender activist and editor-in-chief of Wear Your Voice magazine Ashlee Marie Preston confronted him at Politicon in Pasadena, California on Sunday about the controversy.

Today me & @OsopePatrisse disrupted @cthagod at Politicon for laughing at death threats to trans women made by @lilduval #MSNBC #Politicon pic.twitter.com/aKNFRS0PWq

The #BoycottBreakfastClub hashtag is still going strong, nationwide, and has led to a petition.

The Marsha P. Johnson Institute has created a petition in response to the transphobic jokes on the Breakfast Club.https://t.co/kF9WydYgNE pic.twitter.com/y0nZ8HNKCl

But the man at the center of all this saw no reason to apologize.

"Lil duval they waiting on you to apologize"

Mock acknowledged the problem is bigger than just these radio hosts:

Until cis people — especially heteronormative men — are able to interrogate their own toxic masculinity and realize their own gender performance is literally killing trans women, cis men will continue to persecute trans women and blame them for their own deaths. If you think trans women should disclose and “be honest,” then why don’t you work on making the damn world safe for us to exist in the first place? The “I’d kill a woman if I found out” rhetoric is precisely why so many women hold themselves so tight — the stigma and shame attached to our desires need to be abolished.

Those crickets you hear? That’s Peter Thiel standing up to Trump’s attacks.