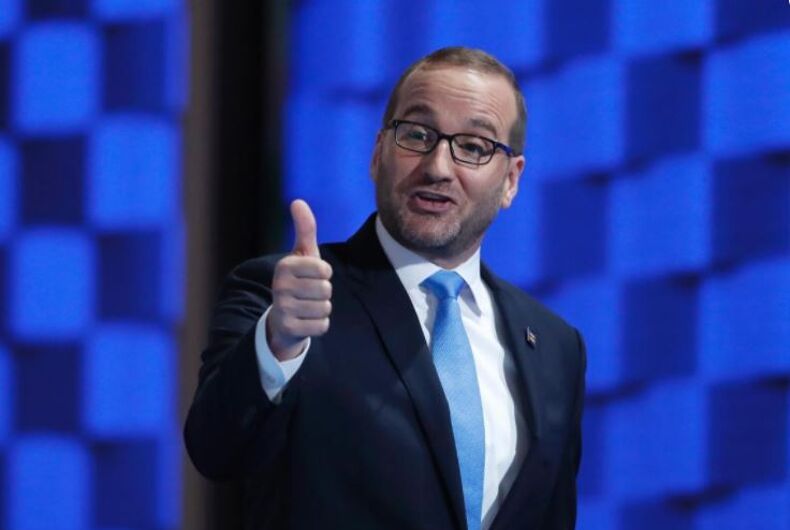 Chad Griffin, president of the Human Rights Campaign gives a thumbs-up after speaking during the final day of the Democratic National Convention in Philadelphia. HRC, one of the nation's leading gay rights groups, is launching a $26 million political organizing effort ahead of 2018 midterm elections.Photo: AP Photo/Paul Sancya

The Human Rights Campaign, one of the nation’s leading gay rights groups, is launching a $26 million political organizing effort ahead of next year’s midterm elections.

While the effort is nationwide, the group is focusing its resources in particular on several key states: Ohio, Pennsylvania, Michigan, Wisconsin, Arizona, and Nevada. All six states are expected to have competitive Senate races next fall, and each is a presidential battleground.

HRC president Chad Griffin said the effort, which will include hiring at least 20 additional political staffers, aims to go “beyond resistance” – drawing from the phrase used by opponents of President Donald Trump’s administration. He said the group will focus on fighting legislation curbing gay rights and backing “pro-equality candidates and initiatives.”

“Resistance is really important – all of the marches and the rallies, that’s all important,” Griffin said. “But it’s also important to not only sustain that, but to take that to the next level.”

HRC’s announcement comes as Democrats and liberal organization grapple with how to rebound from devastating defeats across the country in November. Despite Trump’s sluggish approval ratings, Democrats have failed to pull out victories in several special elections this year, and the party faces a difficult electoral map in 2018, with many competitive Senate races in Republican-leaning states.

Related: Trump is already running for re-election & here’s how he could win

Griffin said the Human Rights Campaign is drawing in part on its efforts last year in North Carolina, where Democrat Roy Cooper defeated incumbent Republican Gov. Pat McCrory, who signed the controversial “”bathroom bill” law. The measure required transgender people to use restrooms corresponding to the sex on their birth certificates in many public buildings, but was rolled back as part of a compromise plan signed by Cooper after he took office.

HRC spent more than $3 million in North Carolina ahead of last year’s election.

“There weren’t a lot of bright spots for our community in the last election but North Carolina was a milestone,” Griffin said.

Second transgender woman attacked in one week in DC