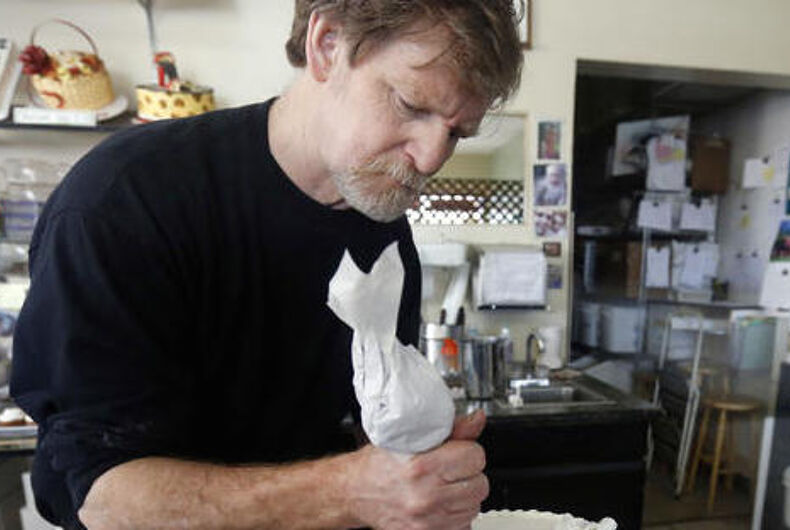 The Supreme Court agreed to hear the case of Jack Phillips, a baker in Colorado who refused to make a cake for a gay couple’s wedding reception.

The arguments for why the state’s anti-discrimination law should have an exception for homophobic bakers are generally asinine, like the argument that Phillips is just against same-sex weddings, not gay people themselves. Because, you know, he would also refuse to bake a cake for a wedding between two heterosexual men, so everything’s OK.

Still, if my Facebook feed and comments on websites are any indication, it’s hard to get people to care about this case. It’s just a cake, and no one is going to die if they don’t get cake.

This misses the point. Not every form of discrimination has to lead to physical harm in order to be wrong. Discrimination in and of itself is a social ill that can make a class of people feel ostracized.

David Mullins, one of the people in the Colorado case who was refused service, said that it was a “humiliating and dehumanizing experience.” If an entire class of people cannot go into a store without wondering if they’ll be refused service because the store owner believes that they’re inferior to everyone else, then they’re less likely to go into that store.

It doesn’t take many humiliations for most queer people to hide who they are. My partner and I held hands in public at the beginning of our relationship; it only took two people throwing garbage at us from a car to sour us to the idea.

It doesn’t matter that there are other bakers out there – homophobic bakers, unless they break their contract and write “It’s Adam and Eve, not Adam and Steve, homos!” on the cake, are perfectly capable of serving LGBTQ customers – just the fact that a minority has to worry about whether they’ll be discriminated against before going into a store means that a harm has already occurred.

It’s hard for some people to see why homophobic discrimination is wrong because the effects are not always immediate and obvious. But the high rates of depression and suicide among LGB people show that homophobia is insidious.

Queer people can hide who they are to avoid some of the most direct forms of discrimination, but that hiding takes a toll. And it’s a perfectly legitimate government interest to limit discrimination in the public sphere to the point where LGBTQ people can be open about our identities anywhere.

The government makes a lot of laws to ensure that public marketplaces run smoothly and treat people fairly. I’m sure that Phillips expects courts to force his customers to pay their bills and the municipality to maintain the roads that lead to his business. So he has to live up to his end of that bargain and follow the law too.

Police: Trans people in Philly are getting pelted with fireworks & paint balls