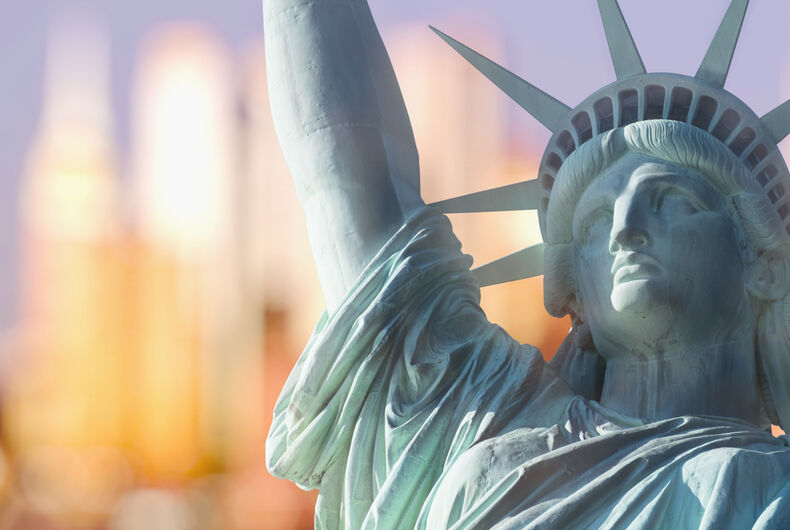 I declare today for the world to hear that the West will never, ever be broken. Our values will prevail. Our people will thrive. And our civilization will triumph.”

Thus, during his speech in Poland’s Krasinski Square this month, President Donald Trump threw down the metaphorical gauntlet by turning up the volume of the dog whistle to full audible blast for human perception by declaring what propagandists for extremist Jihadist groups and ultra-right white supremacist neo-nationalists throughout Europe and the United States have long claimed: there is a clash of civilizations between the so-called West and the East.

What exactly, though, does Trump mean when he talks about “the West”? Not surprisingly, he evokes a white primarily Euro-Christian “civilization”:

“Americans, Poles and the nations of Europe value individual freedom and sovereignty,” he said. “We must work together to confront forces, whether they come from inside or out, from the South or the East, that threaten over time to undermine these values and to erase the bonds of culture, faith and tradition that make us who we are. . . . We write symphonies. We pursue innovation. We celebrate our ancient heroes, embrace our timeless traditions and customs, and always seek to explore and discover brand-new frontiers.”

By implication, all other cultures rank as inferior, savage, and non-innovative societies. Well, Trump’s vacuous understanding of world music is only rivaled by his vacuous understanding of world history, since China, India, the Middle East, and other global regions during numerous historical eras have led the world economically and have produced some of the richest innovations in industry, technology, engineering, architecture, literature, philosophy, art, music, and of course, food.

Though most other U.S. presidents who visited Warsaw, Poland have placed a commemorative wreath on the monument in tribute to the brave Polish Jews at the Warsaw Ghetto uprising against Nazi oppression, Donald Trump chose neither to visit the monument nor to mention the slaughter of the estimated three million Polish Jews during World War II.

In his Poland speech, written by Steve Miller, chief architect of the administration’s travel ban, Trump continued by asking:

The fundamental question of our time is whether the West has the will to survive,” the president said. “Do we have the confidence in our values to defend them at any cost? Do we have enough respect for our citizens to protect our borders? Do we have the desire and the courage to preserve our civilization in the face of those who would subvert and destroy it?”

So, if Trump by implication defined what he meant by “the West,” who does he include in his use of the word “we.” Actually, this “we” is a misstatement since he campaigned during his run for the presidency on a platform of “America first.”

By personally attacking many of our allies, some who attended the recent G20 Summit in Hamburg, Germany (in actuality, now G19 since Trump has pulled the U.S. out of many of the agreements and accords of the other nations), Trump has transformed his “American First” position to that of “America Alone” and “I, Donald Trump First,” with the corollary, “And Screw the Rest of the World.” This comes directly from the playbook of Senior White House Divider and Isolationist-In-Chief, Steve (Breitbart) Bannon.

I found it extremely difficult and frightening to watch the Republican National Presidential Convention last summer, since I had the definite impression that I was witnessing not simply a political gathering, but more distinctly, a neo-nationalist power rally with angry, primarily white and older Party activists.

During the convention coverage, I watched a panel discussion on MSNBC hosted by Chris Hayes, which included Esquire magazine’s Charles Pierce who discussed what he perceived as the “old white people” who run the Republican Party. He argued that the convention is filled with “loud, unhappy, dissatisfied white people.”

Before I could take pride in the accuracy of my own perceptions, GOP Representative Steve King of Iowa piped in with a jaw-dropping quip by retorting: