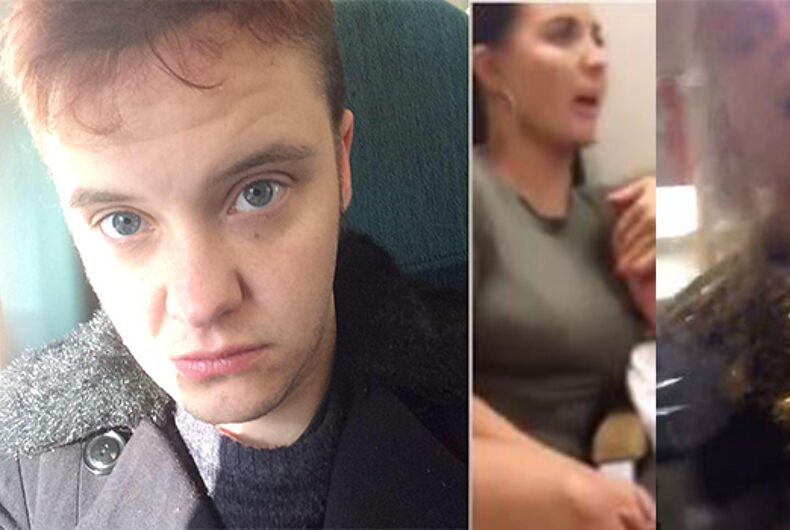 Naith Payton (l) says he was subject to verbal and physical abuse by two women (r) on a London train.

A transgender man in London is trying to identify two women he says hurled anti-trans and anti-gay slurs at him with their children present, before one hit the phone out of his hand.

Naith Payton recorded the incident, having begun in the middle of the argument. Payton reports that the mothers entered the train swearing and using slurs, in spite of the presence of children, including their own.

Payton says he asked the women to stop swearing, and it was at that point that things escalated.

Sharing a video he recorded of the incident on Facebook, he wrote:

I asked them to stop swearing, since there were kids around, and they turned on me.

I didn’t get the worst of what they said on camera, but it was very homophobic and transphobic – they called me a “faggot”, a “fucking gay boy” and a “boy with tits”. They also consistently misgendered me, as you can hear in the video.

Payton also explained that they told their children the “funny noises the tube was making was ‘because of the bad man over there.'”

He says they then encouraged the kids to shout at him, and say he is bad.

He wrote on Facebook that he has reported the incident to British Transport Police, and said they have been great about handling the investigation of the situation. He says police told him they will look for footage on security cameras to see if they can make a positive ID on the women.

“Nothing like this has happened to me before, and it was very upsetting to be made to feel unsafe so close to where I live,” Payton told PinkNews.

“It was also a reminder that homophobia and transphobia are still a real problem.”