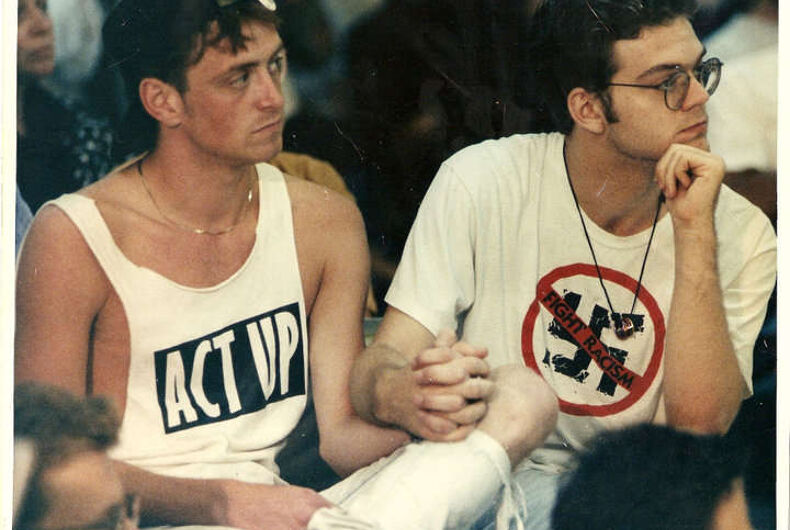 Back in 2011, my husband, Jerame, and I attended a GetEqual fundraiser in Washington, DC. During the speeches it was announced that Tipper Gore was in attendance. Mrs. Gore smiled and waved brightly to the assembled guests and according to the Washington Blade donated $100.

After the event, Jerame and I went out to dinner at a nearby restaurant with a couple of colleagues. A mutual friend stopped by our table to chat briefly and we noticed that he was dining with Mrs. Gore. As we were leaving, we stopped by their table to say our goodbyes.

Our friend introduced us to his companions and, to my delight, Mrs. Gore asked me if we’d met before. Seizing the opportunity (and fortified by a couple of glasses of wine), I proceeded to tell her exactly how we’d met, how mortified I’d been, and how it gave me my start in activism.

The Tour Rolls Into Town

I lived in Evansville, Indiana during the summer of 1992, but spent a lot of time traveling the country. In fact, I’d wager that I spent more time driving around the Midwest, South, and Texas than I spent at home.

The first Clinton campaign for the presidency was doing a whirlwind bus tour of America that summer and I noticed it would be rolling through Evansville soon. Of course, I showed up promptly and then stood around waiting for the always-late future President to arrive. While I was hanging out I noticed a handful of guys waving signs about AIDS and went over to talk to them.

They were from the New York chapter of ACT UP and were following the bus tour as it made its way across the country. At each stop they’d wave signs about HIV/AIDS and shout at Clinton to “Talk about AIDS.”

I was only 18, but I’d done my requisite searches for gay history and I knew exactly who ACT UP was and that they were the preeminent queer direction group. When they invited me to join them on their protest tour, wild horses couldn’t have kept me away.

With about $4 in my pocket and the same amount of political knowledge, I jumped in the van after the campaign rally and took off on the open road with the handful of activists I’d known for a few hours. My big adventure had begun.

One of our next stops was in St. Louis. The campaign had set up in a big open square and I got into position on the steps of the large nearby library; I had a bullhorn and was prepped to deliver my chants.

A well-dressed gentleman with an earpiece soon sidled up next to me; he was obviously a Secret Service agent. He never revealed himself as such, but simply smiled when I questioned him about his occupation. He asked me my name, where I was from, and why I was there; he also warned me that I shouldn’t point the bullhorn actually at candidate Clinton or “someone would have to take action.” Message understood, Secret Agent Man.

After a rousing speech that kept me enthralled throughout, Clinton started wrapping up. Remembering I was supposed to be interrupting him, I raised the bullhorn and started pleading with the candidate to talk about AIDS. I was summarily ignored except by those around me who were upset they couldn’t hear the end of the spiel.

I was a failure as a protester. Instead of causing a ruckus, I’d been sucked in by a speech and made friends with a Secret Service agent. A little crestfallen, I explained my predicament to my new pal. How could I save face in front of my new activist friends?

The man considered me for a minute and must have assumed I wasn’t a threat to anyone except myself. With bleached blonde hair, rubber and silver bracelets up to my elbows, a dozen ear piercings, effeminate disposition, and slight build, I wasn’t exactly a hostile menace.

“If you go stand over there,” the man said as he pointed to an area across the square,”You’ll be able to meet Mrs. Gore and Mrs. Clinton.”

Grateful for a chance at redemption, I bounced through the crowd, met up with my group’s leader, and told him what I’d learned. He took back the bullhorn and gave me one objective: grab hold of Hillary Clinton’s hand, look her in the eye and tell her “Please ask your husband to address HIV/AIDS, Mrs. Clinton.”