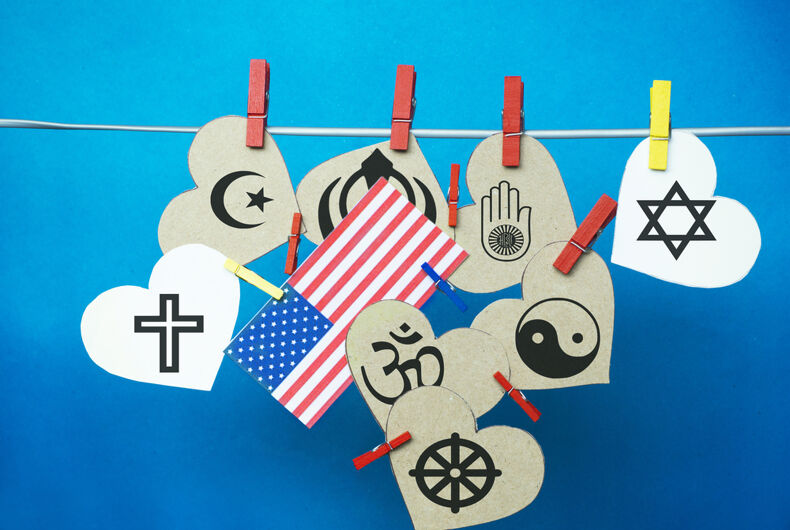 One of the right’s favorite tactics on marriage equality is, instead of outright opposing it, to argue that “religious freedom” requires that we allow anyone – county clerks, bakers, whoever – who doesn’t like the idea of two men or two women marrying to be exempt from anti-discrimination laws.

Workers’ religions may require a lot of things from them that employers and the government usually don’t have to accommodate, but homophobia (and usually sexism) is different, according to this point of view. Homophobia has to be accommodated, no matter the cost.

Well, it turns out that most Americans, including most religious people, don’t agree with the “freedom to discriminate.”

New polling data of tens of thousands of participants collected by the Public Religious Research Institute (PRRI) has been released. They interviewed 40,509 people by phone in the latter half of 2016 and found that 61% of Americans opposed religious exemptions for businesses that don’t like gays and lesbians, while 30% of Americans favored them. White people were the least likely to oppose them at 60%, but they weren’t far from the 68% at which African Americans opposed religious exemptions.

But that’s only part of what’s interesting about this data. Since so many people were interviewed, researchers could provide information about followers of various religions. And it turns out that religious people generally see this as problematic.

It’s probably because it takes a certain alignment of beliefs to agree that a business can use religion as an excuse to discriminate against gays and lesbians. First, it takes a desire to discriminate against gay and lesbian people, which eliminates the more liberal religious groups like mainline Protestants and Unitarian/Universalists. Second, it takes a general belief that anti-discrimination laws aren’t that important, which eliminates the religious groups made up mostly of racial and ethnic minorities, like Hindus and black Protestants. Third, support for religious exemptions requires someone to believe that the government does and should care about their religion’s beliefs but not others (because otherwise providing religious exemptions to the law would become unwieldy very quickly if applied across-the-board), which eliminates minority religions.

Only white evangelical Protestants have the combination of homophobia, white privilege, and short-sightedness to believe that the government should allow businesses to claim religious exemptions to anti-discrimination laws, and even they only provide lukewarm support for the idea.

It’s possible that support for religious exemptions is low in this poll because of how the question was worded. People were asked about “Allowing a small business owner in your state to refuse to provide products or services to gay or lesbian people, if doing so violates their religious beliefs,” which is not how the right sells the idea. Usually, the argument is that a baker shouldn’t be forced to participate in a wedding of a same-sex couple by baking them a cake, not that the baker should be allowed to refuse service to gay and lesbian people.

That distinction, though, is probably not as important in public opinion as it is in court, where it can be used for arguing First Amendment claims. I don’t know of another poll that asked about this specific issue in 2016 or 2017 (earlier polling would be suspect because Obergefell in 2015, which extended marriage equality to all states, changed a lot of people’s views on same-sex marriage), but my guess is that if someone wants a business to have the right to refuse service to a same-sex wedding on “religious” grounds, but no such right to refuse service to, say, interfaith or second marriages, then they probably just agree with discrimination against gay people. I just don’t think that many people would listen that closely to this polling question.

White evangelical Protestants only made up about 18% of PRRI’s sample, and only half of them want religious exemptions. Unfortunately, the poll doesn’t show anything about the degree of support or opposition, and white evangelical Protestants remain a key voting block for one of the two major parties in this country. So don’t expect Republicans to stop pushing for this.