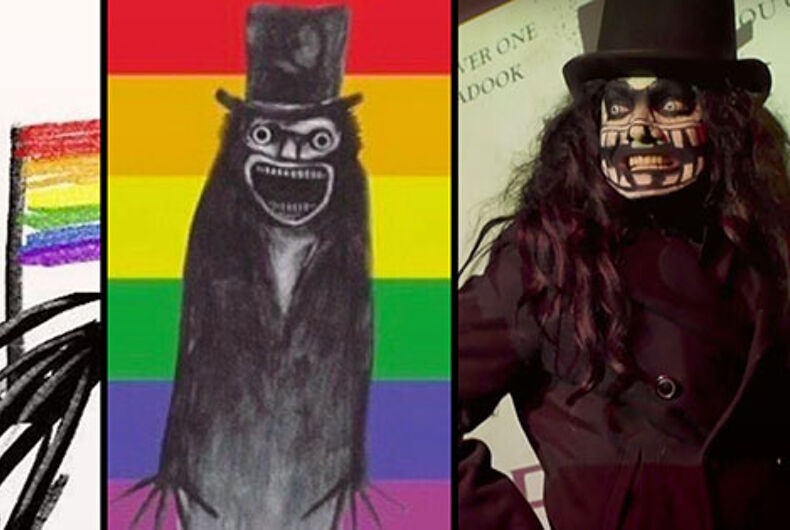 He seems to be everywhere these days, and his name is fast becoming the talk of LGBTQ social media: The Babadook.

The Babadook is an evil character from a little-known horror film from 2014 known for wearing a top hat and trenchcoat and he has reemerged as what many consider “the” LGBTQ icon of 2017.

Besides, as Tim Teeman wrote in the Daily Beast, his mourner’s black outfit is not only always chic, but also slimming.

And yes, his name is The Babadook. His resurgence was catapulted in 2015 by Netflix adding that film to its offerings, BuzzFeed reported. What we know about him we’ve learned from posts on Tumblr, Facebook, Instagram and a whole lot of tweets.

i'm sorry to everyone but especially my mom pic.twitter.com/8oyUUGEH3K

when your life becomes a meme

Me: Being gay doesn't define who I am
The Internet: Demonic creature the Babadook is now a queer icon
Me: pic.twitter.com/9o1ePfiDbD

Michael Varrati, a screenwriter and curator of Comic-Con’s annual queer horror panel, told Mic the Babadook is a typical outsider, a characteristic that any queer person would recognize.

“This creature is trying to come out and be seen. By internet culture standards, it’s a gay hero,” Varrati told Mic. “The Babadook just wants to step out of the dark and into the light.”

“You never quote know anything about [the Babadook], how it got there,” Briefel told Mic. “It invites this projection in some ways, this identification.”

If it’s the character’s lack of dialogue and black-and-white color palette that appeal to many, Briefel said movies like The Babadook — and the 2017 horror film Get Out — also provide opportunities for people to wrestle with their identities. Photoshopping the monster’s image shows a fervent desire to discuss queer identity, she said.

Principal announces transition to school, and their reaction is amazing