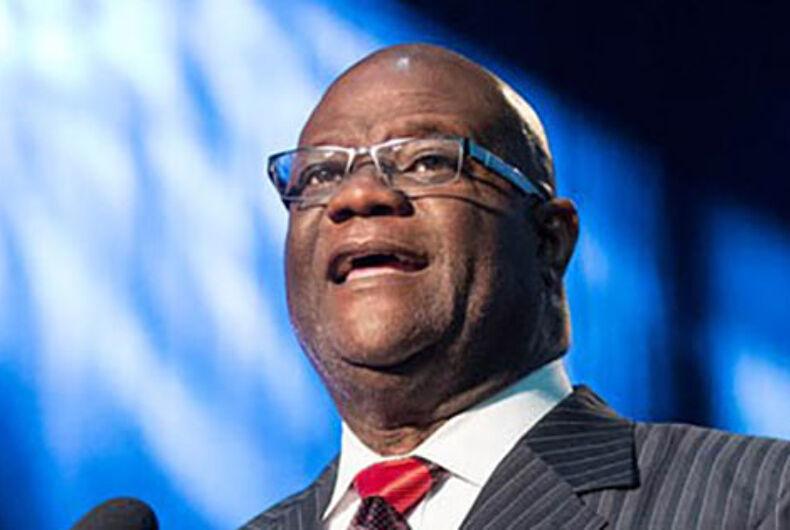 As written, the proposal in part affirmed that “there has arisen in the United States a growing menace to political order and justice that seeks to reignite social animosities, reverse improvements in race relations, divide our people, and foment hatred, classism, and ethnic cleansing.” It identified this “toxic menace” as white nationalism and the so-called alt-right, and urged the denomination to oppose its “totalitarian impulses, xenophobic biases, and bigoted ideologies that infect the minds and actions of its violent disciples.”

It claimed that the development of white supremacy in Christian communities was contained within the theory known as the “curse of Ham,” which directed that “God through Noah ordained descendants of Africa to be subservient to Anglos” and was expanded as a justification for slavery and segregation. McKissic’s resolution asked the Southern Baptist Convention to condemn nationalism and “reject the retrograde ideologies, xenophobic biases, and racial bigotries of the so-called ‘alt-right’ that seek to subvert our government, destabilize society, and infect our political system.”

Following a movement by several SBC members in pressuring the Resolutions Committee, the general body passed a revised and somewhat watered-down resolution against the so-called alt-right.

While the Southern Baptist Convention’s reluctance, at best, to rebuke racism and other forms of oppression is reprehensible, it is by no means surprising when placed in historical context.

The issue of slavery became a lightening rod in the 1840s among members of the Baptist General Convention, and in May 1845, 310 delegates from the Southern states convened in Augusta, Georgia to organize a separate Southern Baptist Convention on a pro-slavery plank. They asserted that to be a “good Christian,” one had to support the institution of slavery, and could not join the ranks of the abolitionists.

Well, either by divine “inspiration” or due to political pressure, 150 years later in June 1995, the SBC reversed its position and officially apologized to African Americans for its support of and collusion in the institution of slavery (regarding it now as an “original sin”), and also apologizing for its backing of “Jim Crow” laws and its rejection of civil rights initiatives of the 1950s and 1960s.

Delegates to the annual SBC session in New Orleans in 1996 passed their “Resolution on Jewish Evangelism” committing to put more energy and resources into converting Jews to Christianity. The resolution read, in part:

Whereas, There has been an organized effort on the part of some either to deny that Jewish people need to come to their Messiah, Jesus, to be saved:…Be It Finally Resolved, That we direct our energies and resources toward the proclamation of the gospel 6 [of Jesus] to the Jewish people.”

The SBC continues to believe, as do some other denominations, that Judaism remains an inadequate or immature religion without Jesus as its central figure.

At their 1997 annual session, SBC delegates overwhelmingly voted to boycott Walt Disney theme parks, movies, and products for extending benefits to partners of lesbian, gay, bisexual, and transgender employees, for the “hosting of homosexual and lesbian theme nights at its parks…,” and for producing films and books with lesbian, gay, bisexual, or transgender characters thereby “connecting Disney to the promotion of the homosexual agenda….”

That we encourage Southern Baptists to give serious and prayerful reconsideration to their purchase and support of Disney products and to boycott the Disney theme parks and stores if they continue this anti-Christian and anti-family trend.”

Regarding their stands on women in the Church, at their 1998 session, the SBC declared that a wife should “submit herself graciously” to her husband’s guidance, and the denomination has since removed women from top executive posts.

According to the 1998 resolution:

The husband and wife are of equal worth before God, since both are created in God’s image. The marriage relationship models the way God relates to His people. A husband is to love his wife as Christ loved the church. He has the God-given responsibility to provide for, to protect, and to lead his family. A wife is to submit herself graciously to the servant leadership of her husband even as the church willingly submits to the headship of Christ….[She] has the God-given responsibility to respect her husband and to serve as his helper in managing the household and nurturing the next generation.”

In 2010, the  SBC passed its “Resolution on Homosexuality and the United States Military,” which stated in part:

Resolved, That the messengers to the Southern Baptist Convention…affirm the Bible’s declaration that homosexual behavior is intrinsically disordered and sinful, and we also affirm the Bible’s promise of forgiveness, change, and eternal life to all sinners (including those engaged in homosexual sin) who repent of sin and trust in the saving power of Jesus Christ (1 Corinthians 6:9-11).”

So, how long will it take for the Southern Baptists Convention to apologize again to black people and all people of color, to LGBTQ people, to Jewish people, to women, to all the people and groups they have offended?

With religious rights come responsibilities, and with actions come reactions. Whenever clergy pronounce and preach their oppressive dogma, they must take responsibility for the bullying, harassment, violence against and suicides of individuals and groups they degrade and demean.

This critique does not amount to a simple theocratic disagreement. This is not a “disagreement” at all! It speaks to issues of power and control; it goes to who has the power to define “the other” and who has the power and control to define “the self”: the individual and members of a social identity group, or rather, the Church with a capital “C.”

An essential element of liberty is having the freedom to define oneself.

Gay man who threatened Pulse-style shooting is back in jail