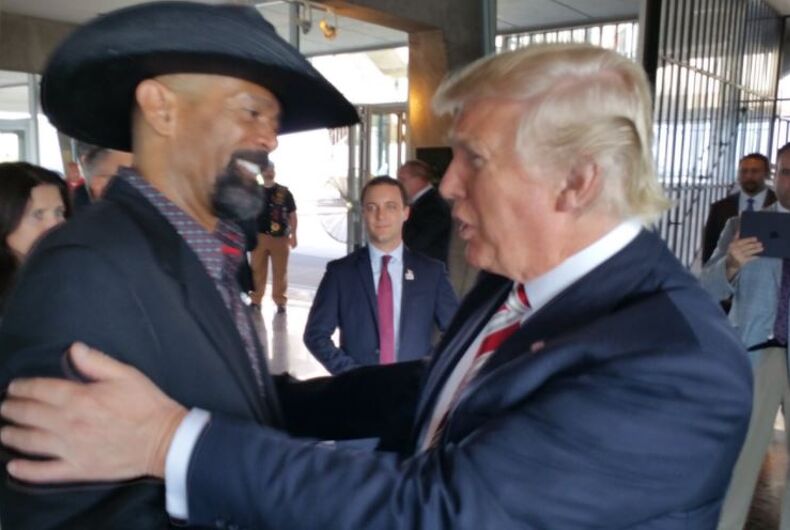 Sheriff David Clarke, a controversial figure currently embroiled in scandal over questions of inmate safety in the jail he oversees in Milwaukee, is joining the Trump administration as an assistant secretary in the Department of Homeland Security.

Clarke announced he would be accepting the appointment to the federal position on Wednesday, during an interview with radio show WISN-AM.

Clarke has called transgender people mentally ill and said they lead a “freakish lifestyle, and called for “pitchforks and torches” in response to the Supreme Court legalizing same-sex marriage.

Clarke said he was “both honored and humbled to be appointed to this position by Secretary (John F.) Kelly, working for the Trump administration.” Clarke shared that he would be working in the Office of Partnership and Engagement, as a liaison with state, local, and tribal law enforcement, starting sometime next month.

The Department of Homeland Security sent out a tweet noting that senior officials are solely announced by Sec. Kelly, and that no announcement has yet been made.

Sr. positions are announced when made official by the Sec. No such announcement w/ regard to the Office of Public Engagement has been made.

If the appointment announcement is true, and if Clarke hasn’t spoken himself out of the job by speaking too soon, it is a concerning choice for a number of reasons, not least of which the ongoing case alleging inmate abuse.

The family of a man who died of dehydration at the jail he oversees filed a federal lawsuit against Clarke and the jail, alleging that the inmate had been intentionally denied water for days as a form of punishment. An inquest jury determined there was probable cause to bring charges against seven officials with felony neglect.

Clarke was not named, but District Attorney John Chisholm has said he could charge more or fewer officials than what the inquest jury decides is appropriate.

Clarke also regularly targets Islam, which he has called “a sick ideology.”

“Instead of trying to understand it, we ought to just try to kill it,” he added.

And while he is anti-LGBTQ, he is still willing to use the victims of the mass shooting at the LGBTQ nightclub Pulse in Orlando to score cheap political points.

Stopped by Pulse nightclub memorial in Orlando to pay my respects to the victims of a radicalized Islamic terrorist attack. Sobering pic.twitter.com/3Vusw8jSYt

He has also called Barack Obama, Hillary Clinton, and other Democrats “cop haters,” pushed a conspiracy theory about a dead DNC staffer, and predicted Black Lives Matter will soon merge with ISIS, as BuzzFeed News notes.

Michelle Obama said she was never proud of her country til they elected her husband POTUS. I've never been prouder since we got rid of him. pic.twitter.com/pzAxahe7eD

Clarke also once met with Russia’s foreign minister in 2015, as part of a delegation from the National Rifle Association. The delegation met with Dmitry Rogozin, who was under US sanctions, according to the Daily Beast.

While the meeting was not illegal or secretive, it will be more fodder for those pushing for investigations into the reported ties between Russia and the Trump administration, particularly after the firing of former FBI Director James Comey.

Lithuania is doing what the US wouldn’t: Granting asylum to gay Chechens

Canada will apologize to LGBT people discriminated against by government