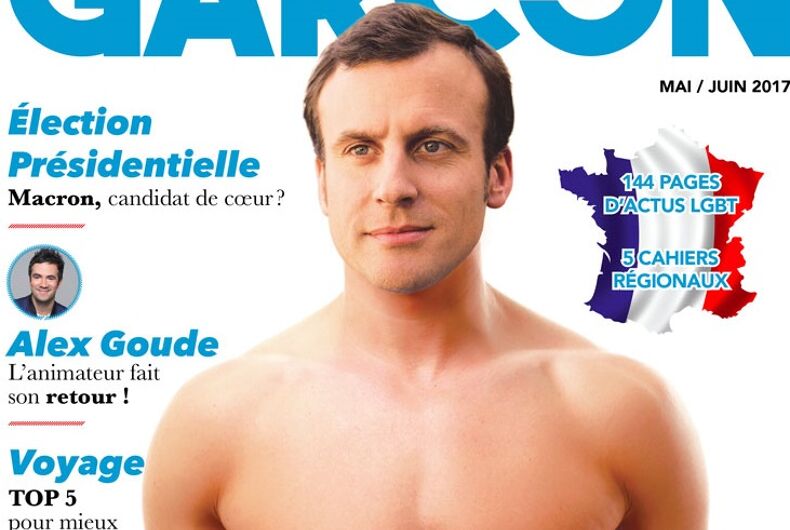 The Russian newspaper Komsomolskaya Pravda ran an article about Emmanuel Macron calling him both gay and a psychopath.

The Komsomolskaya Pravda uses an image from the cover of French Garçon Magazine. The Garçon cover shows a composite image of Macron’s face on the body of a shirtless male model with a quotation from the then-candidate that said, “The LGBT community will always find in me a defender.”

Under the male model on the cover is a title for a separate article about coming out.

“Very popular is the magazine with a half-naked handsome Macron and the expression in English ‘Coming Out’ (for gays this expression means ‘to get out of the shadows,’ to admit that you are also gay),” the Komsomolskaya Pravda article says.

The magazine also mocks Macron’s wife, who is 24 years older than him, by calling her his “mommy-wife.”

The Komsomolskaya Pravda article cites a psychiatrist who claims that Macron is a psychopath based on a study of his biography. “Like all psychopaths, he believes in his higher purpose. Macron does not love France and will not fight for the French people.”

This is not the first time that Russian media has accused Macron of being gay. In February, the Russian journal Sputnik hinted at Macron being gay, saying that he was backed by a “a very rich gay lobby” and that that “means everything.” Julian Assange also promised to provide revelations of the then-candidate’s private life.

Moscow preferred Marine Le Pen, who promised a more distant relationship between France and the United States in exchange for a closer relationship with Russia. Her party, the Front National, has been dogged with rumors of seeking financial support from Russia.