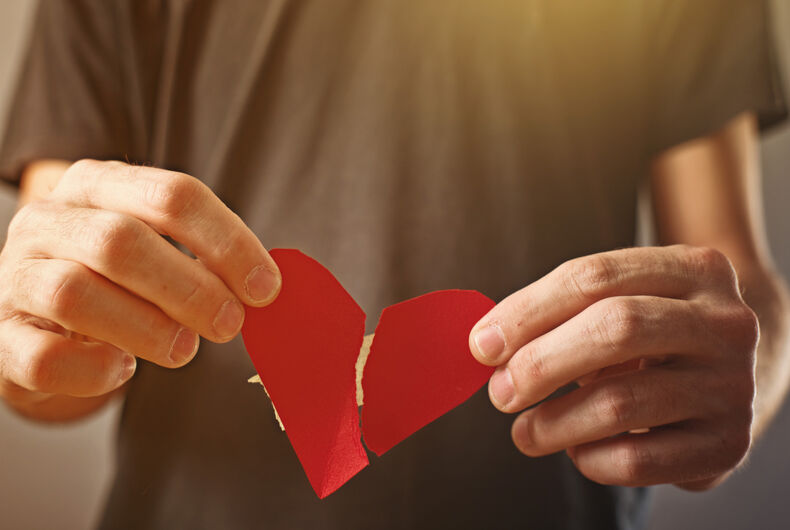 Everyone remembers the first time they had sex. It sticks in your memory and can help shape future desires and preferences.

I was scanning photos into my computer when I found this one — the only one — of Steve, the first guy I had sex with. I don’t remember Steve’s last name; he only lived in town for a few short months and moved before he made the yearbook. I blurred his identity since I don’t know what his current sexuality or situation is.

It was the summer of 1988. I was 16 and he was 17. That’s George Michael’s Faith cassette next to him on the bed. This picture was taken the “day after;” George had kindly provided mood music the night before. I still can’t hear “Father Figure” or “Kissing a Fool” without thinking about that night.

I feel a compelling need to track Steve down so we can talk. I owe him an apology.

I’d already had sex with a girl when I was 14 or 15. It didn’t really do much for me and I hadn’t pursued other chances to do it again. (Instead, I thought about becoming a priest even though I’m not Catholic. Seriously.)

Then I met Steve. I was full of confusion because I knew what I wanted, but I didn’t have the words to explain it. We clicked and I loved him as only first loves can. I couldn’t tell him, of course, but apparently my desire was clear.

My “bedroom” was the top landing of our stairway. Technically, it was a one bedroom apartment, but we’d improvised. The drawback was that mom’s room was the only other room upstairs other than the bathroom. My bed was outside the door to her room; I’m standing in her doorway to take the picture.

Steve slept over at my house one night and insisted we sleep downstairs in the living room because it was “too hot” upstairs since we didn’t have air conditioning. We stayed up late talking and at one point he just asked me, “Are you gay? Do you like me?”

I shyly acknowledged that I did like him, but doubted the whole gay thing. He shocked me by telling me that he was gay and liked me too. It didn’t take long after that for us to end up wrapped in each other’s arms.

We continued the relationship as the next couple of months sped by until it was time to go back to school. Suddenly, I was panic stricken. What would happen when we went back to class? Would someone find out? Would everyone know our secret?

Steve and I had a mutual friend, Steph. I adored her and so did he. She was in his grade and they got to talk in class, while I only hung out with her between classes or after school. One afternoon, Steve followed me home in a really good mood.

“It’s a beautiful day and I feel so free!”

“I told Steph about us.”

My knees buckled. I sat down on the front steps to my house in shock and started to cry. I asked Steve to leave and shook with fear that my mom would find out. While I was always the class fag, how could I prove them right? I wasn’t the horrible names classmates had called me. No one liked a faggot – that had been made abundantly clear from the many beatings I’d already endured.

It was all Steve’s fault. I was angry. I was scared. I was young and stupid.