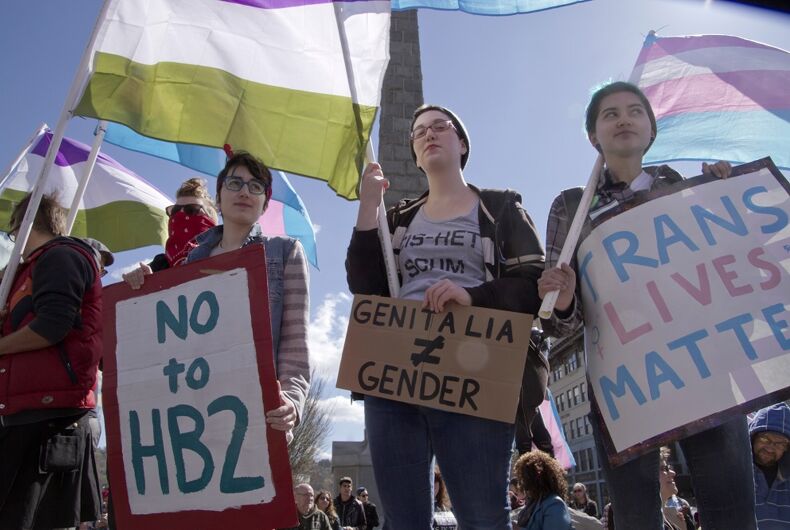 A federal judge will allow a transgender woman to proceed with an employment discrimination lawsuit under the Americans with Disabilities Act (ADA), ruling that, while gender identity is not covered by the ADA, gender dysphoria is.

“This decision is consistent with contemporary medical standards, and is a huge step forward for the transgender community,” said Jennifer Levi, the Transgender Rights Project Director at GLAD.

Kate Lynn Blatt worked at the retail chain Cabela’s in 2006 and 2007 in Hamburg, Pennsylvania, where she says she endured harassment, was not allowed to use the women’s bathroom, and was forced to wear a name tag with the first name given to her at birth. In her lawsuit filed in 2014, she claims that she was fired after false accusations were made against her.

Judge Joseph Leeson did not rule on the facts of the case. Cabela’s filed a motion to dismiss Blatt’s claim, arguing that gender identity is excluded from the ADA. So Leeson was only looking at the question of whether the ADA prohibits the discrimination that Blatt says she faced.

This statement contrasts the popular – and politicized – description of what judges should do when they interpret law. There’s an idea, often expressed when Supreme Court Justices are going through Senate confirmation, that judges should be like baseball umpires and just interpret the law as written.

Of course, if the law was written in a way that there was only one way to interpret it, then we wouldn’t need a judiciary to interpret the law. Judges rule on the meaning of laws when there are many reasonable interpretations, and they have various rules for choosing which interpretation is best.

Leeson points to tension between the ADA’s stated purpose and the list of excluded disorders. The ADA says that its intent is to “provide a clear and comprehensive national mandate for the elimination of discrimination against individuals with disabilities,” and defines a disability as “a physical or mental impairment that substantially limits one or more major life activities of [an] individual.”

In the DSM-5, the book that classifies mental health conditions, gender dysphoria is separated from gender identity and is only used to describe discontent stemming from gender identity issues. The American Psychiatric Association, which publishes the DSM-5, said that “gender nonconformity is not in itself a mental disorder,” but that gender dysphoria is “the presence of clinically significant distress associated with the condition.”

Gender dysphoria is a condition with symptoms like anxiety, depression, and social isolation, so Leeson concludes that it should definitely be covered by the stated purpose of the ADA.

But the ADA also excludes some disorders. Here is the relevant text from the law (emphasis mine):

Under this chapter, the term “disability” shall not include

(2) compulsive gambling, kleptomania, or pyromania; or

(3) psychoactive substance use disorders resulting from current illegal use of drugs.

In this case, Leeson wrote that he is required to take the broadest interpretation of the ADA that he can, while narrowly interpreting the exceptions so that the law can achieve its broad goal.

Leeson responded, though, that when Blatt asked to use the women’s bathroom and to have a name tag with her correct first name on it, it’s possible to interpret that as her asking for accommodations for a disability, since those measures would have reduced the anxiety and social isolation associated with gender dysphoria. After asking for those things, Blatt says that she was retaliated against.

Therefore, it’s possible to interpret the facts as a pure disability discrimination claim, and the judge’s role here isn’t to rule on what the facts are, just on what the law says.

Blatt’s lawyer, Neelima Vanguri, is happy with the ruling. “I’m hopeful we will be able to expand civil rights for transgender people just a little.”

Could Mike Pence go down with Trump in Russia investigation?

This dress made of Starburst wrappers is the sweetest thing