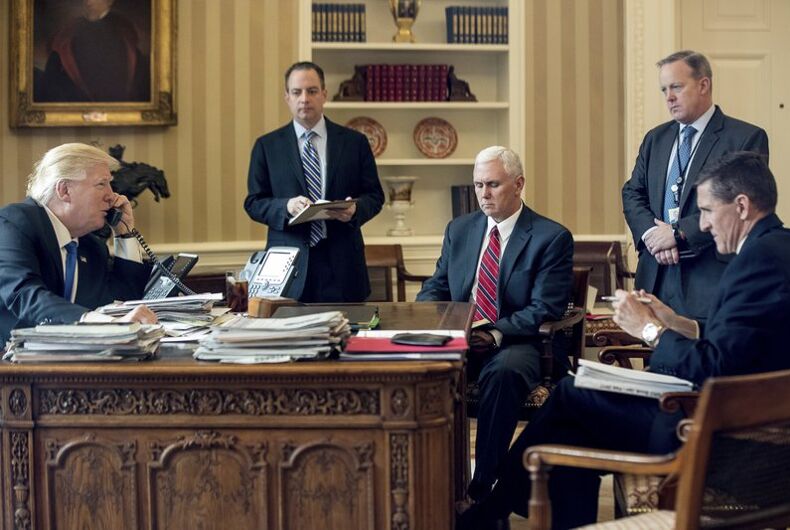 Vice President Mike Pence must have asked himself countless times by now whether he was right to hitch his wagon to President Donald Trump’s to his star.

Yet Pence has stood by Trump, from one scandal to the next, starting with the Access Hollywood tape leak during the campaign, to his attacks on federal judges, and now the ongoing investigations into possible ties between the Russians and the Trump campaign.

Questions are once again arising as to when Pence knew about former national security advisor Michael Flynn’s paid lobbying work on behalf of Turkey, as he stands by his claim that he learned about it in March, through the media.

Pence’s office released a statement on Thursday saying he “stands by his comments in March upon first hearing the news regarding General Flynn’s ties to Turkey and fully supports the president’s decision to ask for General Flynn’s resignation.”

Two sources close to the vice president told Politico that it is likely that he was not aware of Flynn’s lobbying work. That, as the publication puts it, places Pence “in an uncomfortable position: he either delivered a false statement in March, or was kept in the dark about critical information relating to one of the president’s most senior aides.”

Flynn informed the transition team that Pence headed up over two weeks before the inauguration that he was under federal investigation, The New York Times reported on Wednesday. Flynn is said to have first disclosed the information to transition team chief lawyer Don McGahn, now White House counsel.

The White House maintains that Trump did not know of Flynn’s work for Turkey.

Pence said in numerous interviews that Flynn had not discussed sanctions with Russian ambassador Sergey Kislyak during the transition, which turned out to be untrue. Again, Pence said he learned the truth through the media, this time the Washington Post.

Attorney General Sally Yates testified before the Senate that she warned Trump that Flynn could be susceptible to Russian blackmail for misleading Pence on the nature of his conversation with Kislyak.

The vice president also denied that a request for a security clearance had been made for Flynn’s son, apparently unaware that it had in fact been requested.

Pence also said that Trump decided to fire then-FBI Director James Comey upon the recommendation of the deputy attorney general, only to be made to look like a fool again when the president said later in an interview that he had already decided to fire him.

There are fears within the LGBTQ community, and among other progressive groups, that a Pence presidency could be even more damaging, considering his record as a highly conservative lawmaker. If Pence continues to be tainted by his proximity to Trump, it could help prevent his rapid ascendancy, should Trump find himself eventually impeached.

Whether Trump manages to take Pence down with him, he has in the meantime managed to make any rational observer skeptical any time he opens his mouth to defend the administration.

In other words, business as usual for anyone whose job it is to defend the president.

In landmark ruling, trans woman can sue under Americans with Disabilities Act