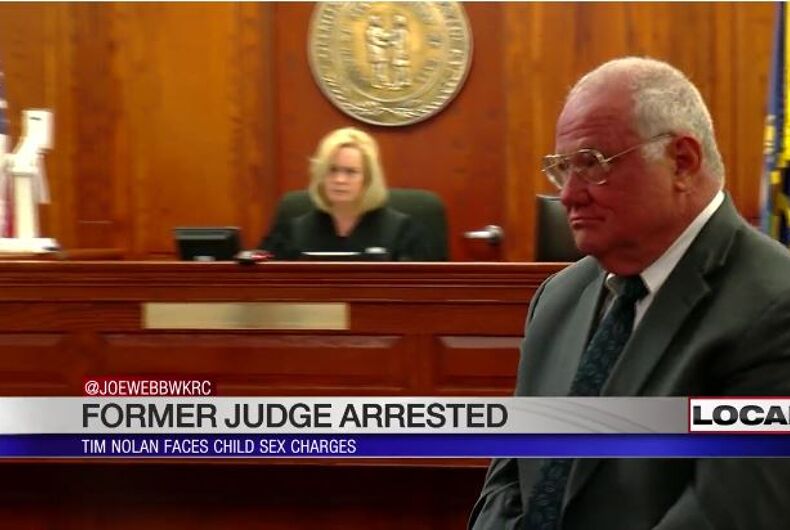 Judge Tim Nolan of California, Kentucky, was charged with felony human trafficking of a minor, felony inducing a minor to engage in sex, and a misdemeanor charge of supplying alcohol to a minor, reports The River City News.

The alleged abuse, which is described as subjecting someone under 18 to “commercial sexual activity,” is said to have occurred in August 2016, while he was serving as the Campbell County, Kentucky Donald Trump campaign chair.

In November 2016, Nolan was elected to the Campbell County Board of Education.

Back in June, Cincinnati.com reported that Nolan had filed suit against the owners of the website GOPfacts.org, over a photo of a man in a Ku Klux Klan outfit that Nolan had posted on his Facebook page, and which GOPfacts.org claimed was Nolan himself.

Nolan posted the photo to Facebook, and then quickly deleted it, encouraging people to come out to a Campbell County bar called the Rabbit Hole.

“Comn(sic) out to the Rabbit Hole and join the clan,” Nolan captioned the picture, which he claimed was of his friend, not himself.

Nolan’s lawyer was quick to point out that the friend in the photo has two black grandchildren, apparently meant to prove the man couldn’t possibly be a racist.

The KKK photo scandal cost Nolan his appointment by Governor Matt Bevin to the Kentucky Boxing and Wrestling Commission, but did not jeopardize his position within the Trump campaign once he assured them he isn’t racist.

Nolan, 70, entered a not guilty plea to the sex charges and was released on a $50,000 bond. He must wear an ankle monitor and must stay 1,000 feet away from the alleged victim and the victim’s family. A preliminary hearing has been scheduled for May 5 at 2 p.m. in Boone County District Court.

The case is being handled in Boone because Campbell County Circuit Court Clerk Taunya Nolan Jack is Tim Nolan’s daughter.

We are immensely troubled and saddened to hear of the arrest of Mr. Nolan and grieve as a district for those impacted. Campbell County Schools’ leadership is currently monitoring this situation and working to determine next steps. We ask the community for your continued confidence in our commitment to each and every child as we work to provide them with the highest quality education in a safe and secure setting. Our mission calls us to do ‘Whatever It Takes’ to ensure high student achievement and success in college, career, and life. We will continue with this mission, regardless of any obstacles placed before us.

20 years to the day after coming out episode, Ellen wins Daytime Emmy