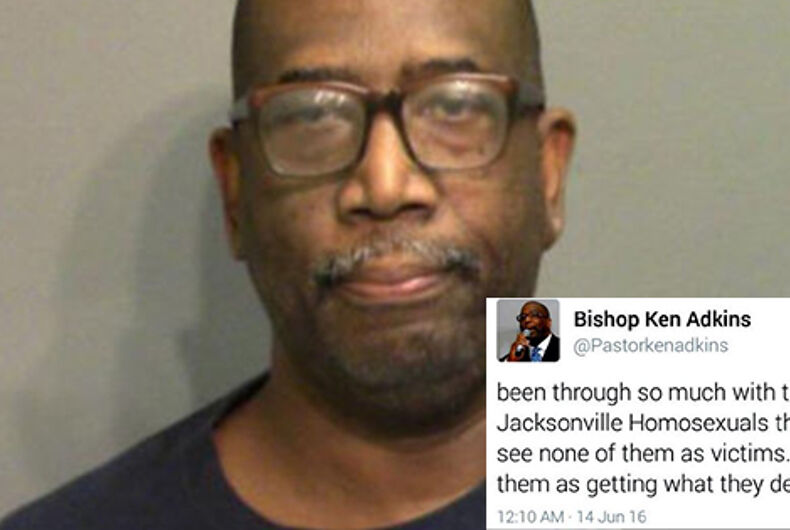 An antigay pastor who said the victims of the mass shooting at Pulse nightclub in Orlando “got what they deserved” has been sentenced to life in prison on child molestation charges.

Kenneth Adkins will be eligible for probation after 35 years, reports The Florida-Times Union, but as he is 57 years old, it is unlikely he will ever be released.

He was found guilty on eight charges stemming from a sexual relationship he had with a 15 year-old boy and girl from his church.

Adkins’ accuser, now an Army specialist, described how the pastor encouraged himself and his girlfriend, both of whom were a year younger than the age of consent in Georgia, to have sex in front of Adkins so many times he lost count.

The abuse is said to have occurred in the church office, at the beach, and in Adkins’ car.

The man also said Adkins “provided him with money and support” and that he had offered up his girlfriend to Adkins as a gift for allowing the couple to have sex without repercussions.

The state characterized Adkins as having groomed the teens, whom he was supposed to be mentoring, to consent to his sexual desires. The female in question denies the activity took place.

Katie Gropper, the assistant district attorney who tried the case, described the young woman as being “still in his clutches,” hence the denial.

Following the massacre at Pulse in June 2016, Adkins tweeted that he had “been through so much with these Jacksonville homosexuals that I don’t see none of them as victims. I see them as getting what they deserve!!”

This was but one example of his antigay tweeting:

Adkins maintains that he is innocent, and told The Florida Times-Union that the jury didn’t examine the evidence closely enough, like the juries did for the Casey Anthony and George Zimmerman cases.

Assistant State Attorney Katie Gropper read a statement from the now 22 year-old male victim in court, which read, in part:

Throughout this time I’ve felt nothing but shame and guilt which later led to depression. There is never a time I wish I could stop thinking about it. Constantly depressed and never feeling like the shame or guilt would leave, I considered multiple easy outs. Once I figured out who Kenneth Adkins truly was, it hurt and I didn’t want to believe it. Weighing the positives and the negatives was the most difficult part. Attached to those feelings I felt like if I said anything, I would be betraying him. He was the closest thing to a father that I had. I didn’t want to say anything. I didn’t want to believe that I was a victim…I felt so emasculated back then and even now.

Adkins’ lawyer filed a motion for a new trial, while also withdrawing himself from the case, saying Adkins can no longer afford to have a private attorney.