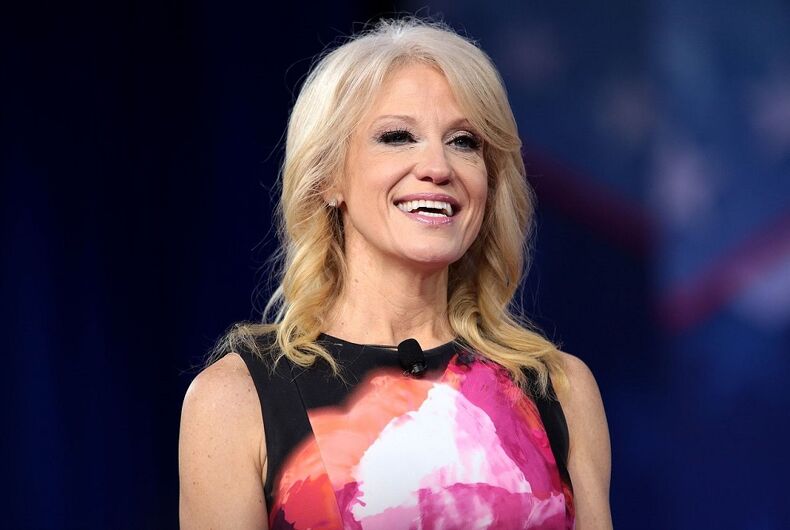 This is the Genuine Fake News Network (GFNN), formerly the Fox News Network before it imploded by paying out millions of dollars to settle sexual harassment and racism lawsuits. We got the station for a song.

I am your host, Al M. Moannie, for our show Incredulity.

We continue our coverage already in progress of CNN’s Anderson Cooper, who is interviewing Kellyanne Conway, White House Spoke-Spinner for the Trump Administration.

Anderson Cooper: So if I understand the White House press release correctly, you are saying that your boss, through his Deputy Attorney General, Rod Rosenstein, fired FBI Director, James Comey, because he botched the investigation into the use of a private email server by then-Secretary of State Hillary Clinton by politicizing the probe and damaging Ms. Clinton’s chances to become the next President of the United States? Are you saying that Comey was not fired because he is looking into the Trump campaign’s possible collusion with Russia to affect the outcome of the election in Mr. Trump’s favor?

Kellyanne Conway: That’s exactly right, Anderson. We wanted to win the election fair and square, but Comey’s actions placed doubt in the process by calling into question Ms. Clinton’s motives.

Cooper: But at the time of Mr. Comey’s actions last summer and just a few days before the election, Mr. Trump was ecstatic, and praised Comey for intervening the way he did.

Conway: You totally misread Donald Trump’s intentions and his body language. Because he always admired and respected Hillary, he believed that Comey betrayed her. Mr. Trump felt really really bad for her.

Cooper: So bad that he called her “crooked Hillary”?

Conway: Anderson, “crooked” referred to Hillary’s path to the Oval Office: first she was an effective advocate for children, then she served as First Lady of Arkansas, then First Lady of the United States, then U.S. Senator, then runner-up as the Democratic Party’s Presidential nominee, then as the Party’s standard-bearer. “Crooked” means that she took a circuitous route.

Cooper: That’s really hard to believe, especially when throughout the entire election cycle, he yelled to “lock her up.”

Conway: Of course, Anderson. He was asking all of his potential voters to vote for her instead so she could “lock up” an electoral college majority and become the next president, the first woman ever to hold the office. Mr. Trump has always been magnanimous, never thinking about himself.

Cooper: (eyes rolling around in his head) What?! Are you serious? Mr. Trump never puts his own interests first? He really wanted Ms. Clinton to win?

Conway: Of course. Mr. Trump is a generous man, and he is especially respectful of women. He has always attempted, literally and figuratively, to stand behind the women in his personal and business life.

Cooper: Yes, and to grab them as we all discovered in the Access Hollywood tape.

Conway: Most certainly, for as we all know, many women love to keep cats as pets, and Mr. Trump, being the animal lover that he is, frequently grabs pussy cats and gives them a deep and firm rubbing.

Cooper: Kellyanne, do you really expect the American people to buy that explanation?

Conway: Of course I do. In fact, you remember that many Democrats called Bill Clinton the “first Black president” because he championed programs and policies to make the lives of Black people in our country better.

Conway: Well, likewise, many Republicans are already calling Donald Trump the “first woman president” because he has been so good to and for women throughout our great country. Who else would have promoted his daughter, Ivanka, to such a high prestigious position with her own private office in the West Wing? Who else would have nominated Betsy DeVos, someone with a such passion for learning, to lead the Department of Education?

Cooper: But neither of these women have any actual experience for the powerful positions they hold.

Conway: And that is precisely the point. Donald Trump cares so much about women that he provides them great opportunities for on-the-job training. No other President has done that. Others have all selected people who are fully qualified and vetted for the jobs. Mr. Trump, on the other hand, was elected by the majority of voters to “drain the swamp” of how things are normally done in Washington.

Cooper: You do understand that your boss didn’t actually win the majority of the popular vote? Hillary did.

Conway: And that is exactly the reason why this president, immediately after taking office, decided not to fire Mr. Comey right away. The FBI Director’s intervention in politicizing the election assured Ms. Clinton the popular vote, thereby saving her from possible embarrassment.

Cooper: But since the election, the new president constantly argues that the almost three-million more votes that went to Hillary were all acquired fraudulently: by “illegal aliens,” by dead people, by individuals voting multiple times.

Conway: Oh Anderson, what you are saying is a clear example of how the lamestream press misinterprets and misunderstands the meanings behind the president’s words. You all take him so literally. You seem not to understand meaning, intent, and nuance. You don’t know the president like I do.

Cooper: (turning red with exasperation, smoke emanating from his ears)

Conway: Anderson, are you alright? You don’t look so good.

Cooper: (gasping for air) Kellyanne, please look for the meaning behind, in front of, underneath, and above my words: How can you and Sean Spicer maintain your sense of integrity and remain at your jobs telling all these lies? At the end of the day, you are diminished and demeaned, and you do a great disservice to the office of the presidency and to our democracy.

(looking into the camera) I can’t do this anymore, so now back to the studio. I’m going back to washing rescued elephants in a Myanmar animal sanctuary. Elephants don’t lie.

Mormon church to cut ties with Boy Scouts of America

Hallmark has a greeting card for transitioning