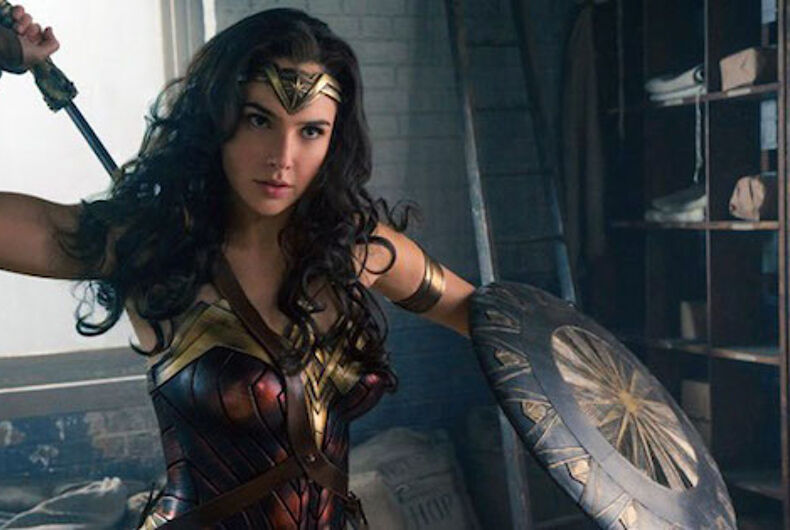 An Austin, Texas moviehouse has provoked the ire of men and men’s rights activists by daring to screen the superhero movie Wonder Woman to women only. The no-men rule applies not only to the audience, but behind the concession counter, the ticket booth, even the projectionists will be individuals who identify as female.

Of course it won’t be the only screening, and everyone, even men, can attend those other ones, no problemo.

But the response to the idea of giving women a space to enjoy a female superhero film was so enormous the Alamo Drafthouse theater not only sold-out that show, but added another. Yep, women only, again.

Cue the outrage. Because, of course, when it comes to dudebros, it’s all about them.

Someone on Twitter complained: “I hope someone sues this is discrimination based on sex.”

“Very tacky Alamo,” Facebook user Allan Dale wrote. “I’m all for equality and having a screening specifically stating it is not inclusive to everyone, is against equality. I’m not saying Alamo did this intentionally, but it is still just wrong.”

“It’s sexist and bigoted,” Evan Johnson added his two cents. And more than half of those responding to his comment appeared to be laughing at Johnson.

“Came here to see fragile masculinity and whining, was not disappointed at all,” Isaac Shazbaz Boyles wrote. “Hey Alamo can you do more of these sorts of things? I like laughing at men who are threatened by women getting to have their own lives without constant male presence 24/7.”

Isaac was not alone.

“This is a great idea and I will see it another time!” said one commenter. “Wow, that was easier than deciding to feel persecuted!”

But these guys were definitely in the minority.

“If women are entitled to exclusivity and a sense of togetherness, then so are men,” Greg Martin added. “If you don’t provide the experience people are looking for, others will, and frankly, with that attitude, I’m glad you’re not going to be the ones making that money.”

The film doesn’t even open until June 2, and already there are predictions that it will be a huge smash at the box office, in spite of these guys, who feel a women-only screening will deprive them of their civil rights.

Alamo responded by adding even more all-female screenings at its theaters across the country, which are likewise selling out rapidly. Proceeds from certain screenings are even going to benefit Planned Parenthood.

“This has zip to do with equality,” the theater’s official Facebook account wrote in response to the backlash. “This is a celebration of a character that’s meant a great deal to many women since 1940.”

Since 1920, there have been about 130 superhero and comic book films with solo protagonists in the United States, both on the big and small screens.

Do you know how many of those 130 films had female leads? Eight.

But let’s not lose sight of the real victims. Hetero, cisgender, sexist men, and their fragile feelings.