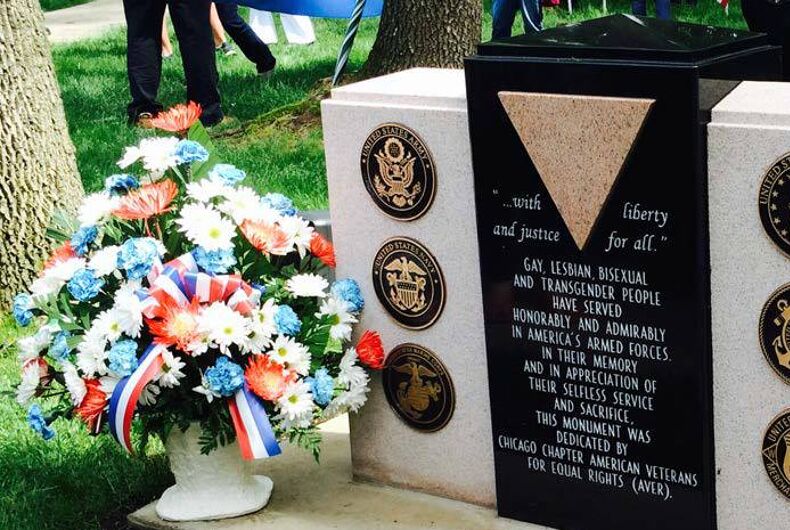 A monument to LGBTQ veterans in Chicago.Photo: Bernie Santarsiero via Facebook

The granite monument is one of just a handful in the nation honoring LGBTQ servicemembers and sits in front of an LGBTQ-friendly senior living complex, Windy City Times reports.

“Every veteran should be remembered and honored for their service,” U.S. Rep. Jan Schakowsky said at the dedication ceremony, which featured performances by the Chicago Gay Men’s Chorus, Windy City Gay Chorus, and Travis.

Chicago Mayor Rahm Emanuel wrote that the monument is “a tribute to the sacrifice of our soldiers” in a message shared at the event.

Members of Chicago’s AVER chapter credited former President Barack Obama will paving the way for the public recognition of LGBTQ veterans by working to lift the Don’t Ask Don’t Tell policy that banned servicemembers from being openly LGBTQ.

“You see what our voices together can accomplish,” noted Chapter Vice President and Treasurer Timothy Zylstra. The event also marked the 25th anniversary of the founded of the Chicago AVER chapter.

According to AVER, the first monument dedicated to LGBTQ vets was erected in Palm Springs in 2001 thanks to the efforts of efforts of AMVETS Post 66 and Palm Springs Gay Veterans. The Arizona Rainbow Veterans designed and donated the first LGBTQ-inclusive memorial in a National Cemetery in 2000.

A National LGBT Veterans Memorial has been in the works for the Congressional Cemetery, but no word yet on when, or if, it’s likely to come to fruition.