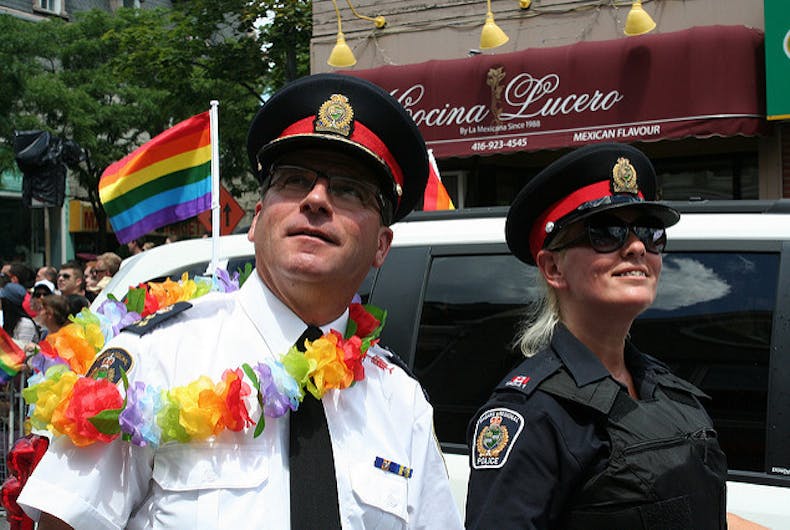 A Toronto police union is asking the city to put a stop to a $260,000 funding grant to Pride Toronto, following the group’s decision to ban police floats from future parades.

“We, as city employees, would feel completely devalued and unsupported by our employer should they fund this event at this time,” the Toronto Police Association said in a letter released on Wednesday, signed by the executive committee of Toronto police’s Lesbian, Gay, Bisexual, Transgender and Queer internal support network, Toronto Star reports.

“How can we possibly feel appreciated by our employer while they sponsor an event that its own employees have been disinvited from participating in as full, equal, and active participants in their role as city employees?” it continues.

In January, Pride Toronto agreed to a list of demands from Black Lives Matter Toronto, including banning police floats. It was a promise signed off on earlier, when BLM activists staged a sit-in that shut down the 2016 parade for about half an hour.

Former Pride Toronto executive director Mathieu Chantelois signed a document agreeing to a list of demands from BLM Toronto, but later said he only did so to get them to move so the parade could continue. Chantelois has stepped down.

Toronto police Chief Mark Saunders announced in February that the Toronto Police Service would not participate in the 2017 Pride Parade. He said he understood “the LGBTQ communities are divided” and that they wanted to “enable those differences to be addressed,” pledging to continue “our ongoing outreach to the LGBTQ communities.”

Mayor John Tory said he wanted to see Pride be “a celebration of inclusion” that doesn’t “selectively exclude certain groups of people.”

Pascale Diverlus, a co-founder of Black Lives Matter Toronto, said the letter was not the way for the police to commit to reaching out to the LGBTQ community.

Diverlus said the move to ban uniformed police was “about safety and about a long history of people — black people, indigenous people — not feeling protected and feeling unsafe.”

Last month, Toronto City Councillor John Campbell told reporters he had a plan to pull funding from Pride Toronto over the police ban, claiming to have the support of a number of other councillors, CBC reported.

At $25M, Bill O’Reilly’s parachute is a lot more golden than his alleged victims