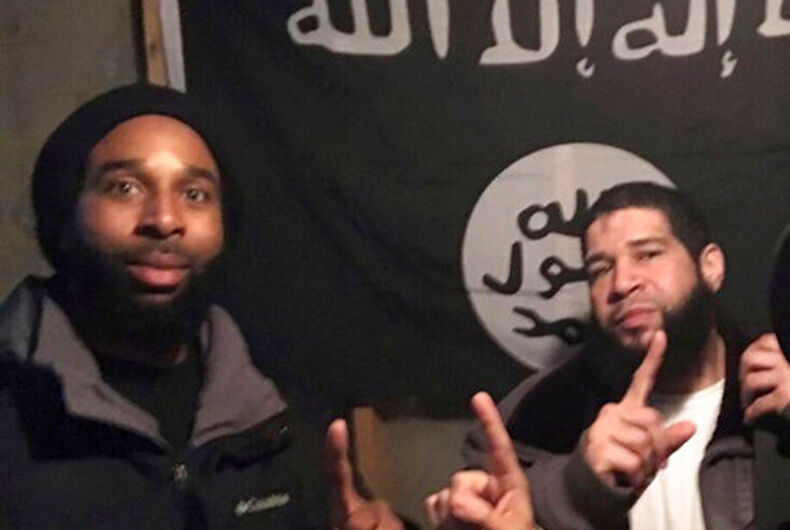 In this undated photo provided by the Federal Bureau of Investigation Joseph D. Jones, left, and Edward Schimenti pose in front of an Islamic State group flag. Jones and Schimenti were arrested by FBI agents on Wednesday, April 12, 2017 on terrorist charges for allegedly conspiring to support the Islamic State militant group.Photo: (FBI via AP)

Two suburban Chicago men who posed for photos holding a black Islamic State group flag at a Lake Michigan beach park were arrested Wednesday on federal terrorist charges, and an undercover operative said one of the men suggested homosexuals should be thrown off the city’s tallest building.

An FBI sting begun in 2015 compiled evidence that Joseph D. Jones and Edward Schimenti sought to provide material support to Islamic State, including by providing cellphones to one person working for the FBI and posing as an IS supporter believing the phones would be used to detonate car bombs in Syria, the 65-page complaint says.

Jones, a part-time chef who also has been attending college, and Schimenti, who worked at a cancer treatment center, drove the FBI operative to Chicago’s O’Hare International Airport last week on what they thought would be the first leg of a journey to Syria. The complaint says Schimenti told him to “drench that land … with blood.”

The 35-year-old men looked tired standing in street clothes with their hands folded behind their backs during a brief initial hearing Wednesday in federal court in Chicago. When Magistrate Judge David Weisman asked if they understood the charges, both answered calmly that they did.

Schimenti’s mother, Joni Schimenti, attended the hearing and told reporters outside court: “Eddie is no terrorist.”

If convicted, the two men would face a maximum prison term of 20 years. A detention hearing was set for Monday, after which they would enter pleas.

The complaint includes photos of them holding the IS flag at the Illinois Beach State Park in Zion, where they live. It also has postings on their social media accounts.

While he helped the man he believed would go to Syria get into condition at a local gym, Schimenti conceded he wasn’t close to fighting shape, the complaint says. “I’m all big, fat,” he is quoted as saying. “But (God willing), the brothers will just have me be the one to cut the neck.”

Schimenti, who also went by “Abdul Wali,” allegedly told one person in on the sting in February that he was angry about a co-worker because the person was gay. Under Islamic Law, Schimenti was quoted as saying, “We are putting you (homosexuals) on top of Sears Tower (now the Willis Tower) and we drop you.”

A photo posted on Schimenti’s Google Plus profile shows a masked man holding a knife, and caption written in capital letters says that if you can’t travel abroad to fight, “then slaughter the pagans next to you.” After watching an IS video of captured soldiers being burned alive as they spoke a language he didn’t understand, Schimenti says, “I don’t know what they’re saying but I love it,” the complaint says.

A video was posted on Jones’ Google Plus profile entitled, “Some of the Deadly Stabbing Ways: Do not Forget to Poison the Knife,” the complaint says. Another time, a person in on the FBI sting asked Jones if he ever thought about traveling to Syria to live in Islamic State territory. Jones, who was also known as “Yusuf Abdulhaqq,” allegedly answered: “Every night and day.”

This is the latest of several area cases related to Islamic State. A Chicago federal judge last year sentenced former Illinois National Guard Hasan Edmonds to 30 years in prison and his cousin, Jonas Edmonds, to 21 years for plotting to join Islamic State fighters and to attack a National Guard armory just outside Chicago.

The complaint makes a brief reference to Schimenti allegedly suggesting in March that the Naval Station Great Lakes, a training ground for U.S. sailors just south of Zion, could be a terrorist target.

The sting started in September 2015 when an undercover agent approached Jones at the Zion Police Department — where Jones was being questioned about the killing of one of his friends — and the two began talking about Islam. The complaint didn’t offer details about the killing.

Schimenti grew increasingly suspicious about the undercover agents, suggesting that at least some weren’t actually Islamic State sympathizers. He once suggested something was “fishy” about them, adding that he had a good sense of such things because of his own criminal history. Jones also spoke about past convictions.

How did a Republican congressman earn cheers from angry liberals at a town hall?