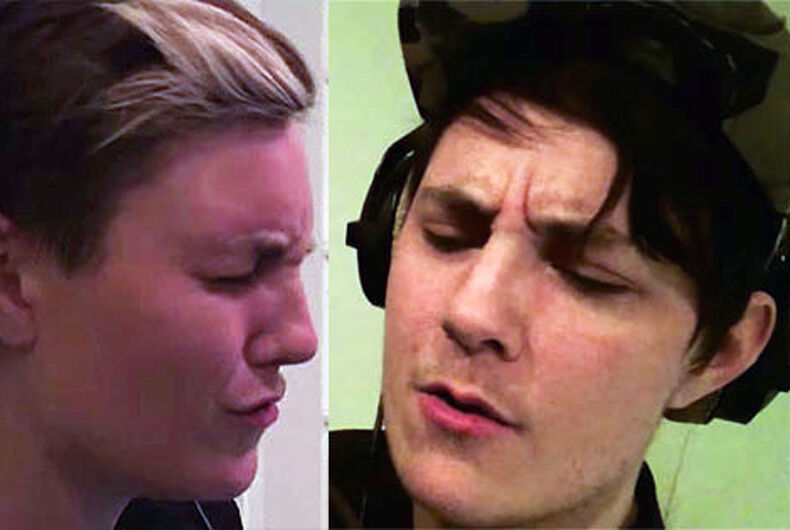 Charlie Peck made some tweaks to “Home,” when he decided he would cover Edward Sharpe and The Magnetic Zeros’ moving love song, but it’s who he chose to accompany him that has brought hundreds of thousands of eyeballs to his YouTube channel.

Peck picked himself, before he came out as transgender.

“Home is wherever I’m with you,” Peck sings, before and after. And they even have a conversation as the video takes us on a tour of photographs of his former self.

“Do you remember everything you’ve been through?” Peck asks.

“I sure do,” replies his pre-transition self.

“When you were struggling… you felt so alone. Do you remember that?”

“Yeah. I do,” she says. And then Peck gives viewers goosebumps with this line:

In an interview with the Huffington Post, he dedicated the music video to the trans community.

The lyrics of the song, with some modifications made by me, say so much. You are not alone, things can get better and put yourself before everybody else’s expectations on how you should live your life. Now that I have the energy to give something back to the trans* community ― this is my heart medicine for those in need.

The result, a blended duet recorded before he began his medical transition and nine months after he started hormone replacement therapy, showcases his deeper register without losing an ounce of impact from his powerful voice, and revealing he is singing this love song, more than anyone,  to himself.

“I was first and foremost hoping for a voice that I could identify with,” Peck told HuffPo.

In contact with other humans, the filter through which everything you say is perceived is your voice. I was also really scared that I would not be able to sing any more. With these thoughts in my head an idea about singing as a way to show others my journey started to form. When I contacted my very talented friend, André Åhl Persson, who is also a musician, and he was willing and thrilled to do this project with me this seed of an idea started to grow.