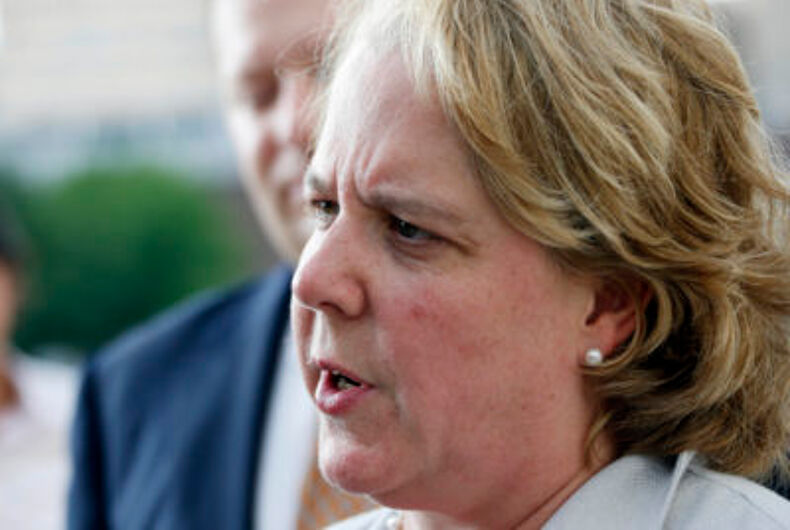 Roberta Kaplan, a New York based attorney, representing Campaign for Southern Equality and a lesbian couple, speaks with reporters following a day of testimony at the federal courthouse in Jackson, Miss., Thursday, June 23, 2016,. Kaplan and others are challenging HB 1523 on the grounds that it violates the principle of separation of church and state contained in the First Amendment to the U.S. Constitution. The plaintiffs, which include Mississippi ministers, community leaders, civic activists and a Hattiesburg church, are asking the federal court to issue an injunction blocking the bill from taking effect July 1. Photo: AP Photo/Rogelio V. Solis

JACKSON, Miss. (AP) — A former Mississippi governor, a journalist, and a lawyer who helped strike down a Mississippi law that protected religious objections to same-sex marriage will receive honorary degrees from Millsaps College.

The Methodist-affiliated Jackson college will award the honors to former Gov. Ray Mabus, lawyer Roberta Kaplan and journalist Joanne Edgar at its May 6 commencement.

Edgar, a 1965 Millsaps graduate, was a founding editor of Ms. magazine, where she worked from 1971-1989. As a Millsaps student, she took part in interracial meetings with students at Tougaloo College.

Kaplan successfully argued for adoption by same-sex couples in Mississippi and led the fight to overturn the state’s religious liberty law, arguing it was discriminatory.

© 2017, Associated Press, All Rights Reserved.
This material may not be published, broadcast, rewritten, or redistributed.
News
adoption, Mississippi, same-sex adoption