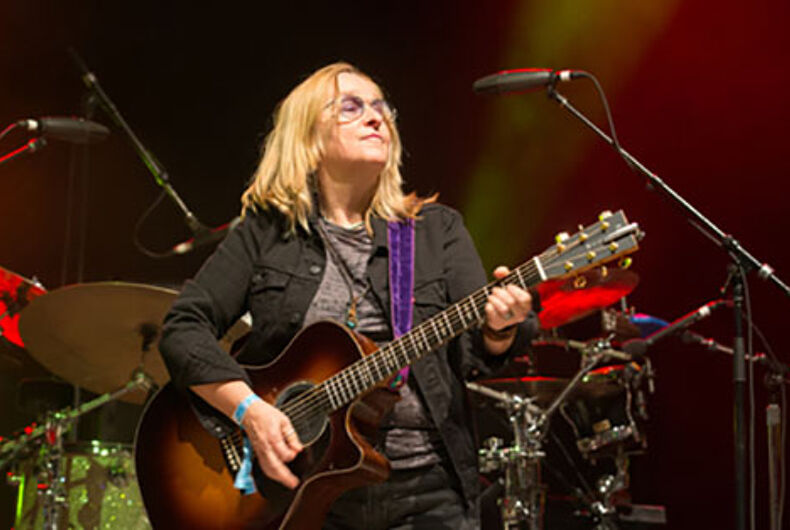 Melissa Etheridge has won Grammys for her work, is proudly living out and queer, and is a cancer survivor. So Chris Azzopardi of PrideSource skipped those already well-covered topics when he recently interviewed the 55-year-old, asking her instead about her newest venture: selling marijuana and the products used to smoke it.

“You know what, I’m not as much of a drinker. I actually just smoke, and yes, smoking helps me write very much – smoking helps me every day,” Etheridge told the writer, explaining she got turned onto weed as she battled breast cancer in 2004.

“Part of what we really want to be is sort of the ’Cannabis for Dummies.’ I can really take everybody through this,” she said. “It’s good for you. And I’ll show you the choices and how to do it if you’re scared and stuff; that’s really what I want my brand to be.”

Etheridge’s brand is Etheridge Farms, and in another interview, she extolled the virtues of pot: “I’m right in the process of branding,” she told Billboard.

There’s a balm that’s so good for muscles and arthritis. I have my own smoke, some edibles and some [oil] cartridges. I’m really just entering the market with what I’ve learned in the last 10 years about cannabis in wanting to bring a product to America that is focused on health and on wellness and how important this plant is and used to be in our medicinal system. Seventy years ago it was on pharmacy shelves, now it’s time to get back to that; to understand plant medicine. That’s really where I want to enter this market in — is for the person who is looking to unwind at night and not have a couple of drinks and feel like crap in the morning. Maybe this is an alternative, maybe I can wind down this way. And wow, maybe this topical actually helps with this inflammation. I just feel really strongly about the medicinal aspects of cannabis.

Just like in her big hit song, “Come to My Window,” Etheridge is not shy about sharing what she’s discovered, making the rounds on YouTube to spread awareness of her brand on shows aimed at the weed smoker.

Marijuana, Etheridge told PriceSource, is “for the person who is looking to unwind at night and not have a couple of drinks and feel like crap in the morning.

“And wow, maybe this topical actually helps with this inflammation. I just feel really strongly about the medicinal aspects of cannabis.”

As NewNow Next noted, the business owner even went so far as to smoke pot on an episode of the YouTube show Between Two Strains last year.

What does the United passenger’s sexuality have to do with his treatment?