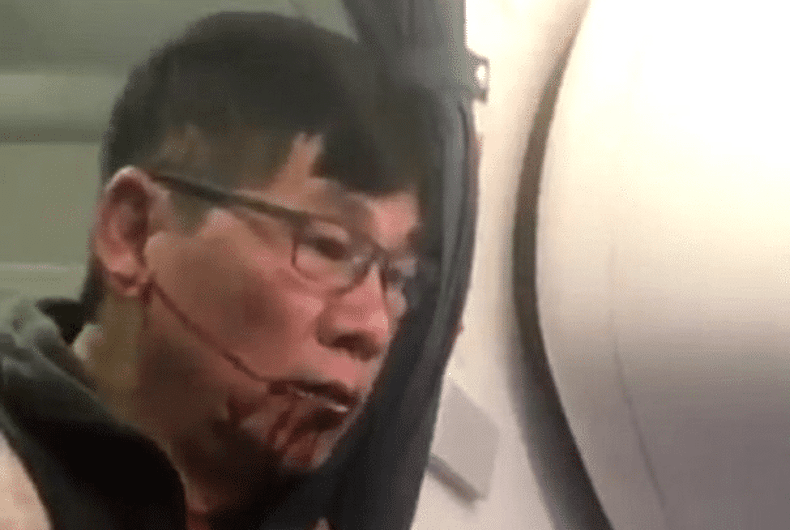 You knew it was coming. After Dr. David Dao was violently removed from a United flight covered in his own blood and dragged down the plane’s aisle like a bag of potatoes, the world was outraged. United stock tanked, social media lit up, and the company’s lackluster “apology” only made things worse.

So now it’s obviously time for some media outlets to start blaming the victim. Unfortunately, the “lurid details” of Dr. Dao’s past problems include extramarital gay sex and drug abuse.

Let’s be clear: No self-respecting queer publication has repeated the claims about the roughed up United passenger’s gay sex scandal. Using queer sex as a scandal and associating it with drugs and infidelity is a time tested method of painting a stereotyped portrait of our community meant to invoke derision and revulsion in the reader. Queer media gets it.

The Louisville Courier-Journal, who reported the details about the doctor’s past problems in their city, doesn’t – and major outlets around the world have repeated the story driving the “scandal” even further on social media.

There can be no doubt that painting a bigger picture of any story is what a good journalist tries to do. The nuance of a story can be lost when readers don’t appreciate the full history of the topic. But are there more shades to this story beyond “Private airline uses militarized police force to rough up paying customer and reinforce its bad business decisions”?

The newspaper “seemed to resort to a familiar shade-the-victim reflex that many publications have been unable or unwilling to shake despite numerous instances of pushback in recent years” according to the Columbia Journalism Review. The storied journalism publication took the Courier-Journal to task, as it rightly should, and compared the article to the infamous piece from the New York Times, in the wake of the shooting of Michael Brown in Ferguson, Missouri, that declared he was “no angel.”

Does it matter if Dr. Dao is heterosexual, gay, bisexual, or even asexual? When he was being pulled down the aisle of that United flight as fellow passengers cried out in horror, who was pondering whether the poor man was single, married, or in an open relationship? Running back onto the plane stunned and obviously terrified, Dao wasn’t looking for his one-hitter or a joint.

None of those irrelevant details matter. They do not paint a larger picture of the story.

The story has been edited now and the need-to-know details were condensed into one sentence that omits all reference to the other person’s gender. The incident itself and United’s corporate behavior became the story again in the updated version.

That attention shift is exactly what needs to happen in this story. As Vice writer Wilbert Cooper wonders, “What about the still-unnamed officers who lifted Dao out of his seat and caused him to bleed all over himself like the Penguin in Batman Returns?”

Now that’s a line of thinking that seems much more pertinent.

Who are the upstanding exemplars of peace and justice that smashed an elderly man’s face into an armrest and dragged him unconscious down the aisle of a commercial flight? What about the flight crew making all those bad decisions from the beginning?

The United CEO didn’t make the decisions that the on-the-ground airport staff did. The police and United staff caused this to happen. So let’s find out more about them and stop trying to blame the victim – no matter their sexuality.